She was spotted sitting along with agitators at a protest organised by the Hindu Jagaran Vedike against the woman who shouted "Pakistan Zindabad" on Thursday. 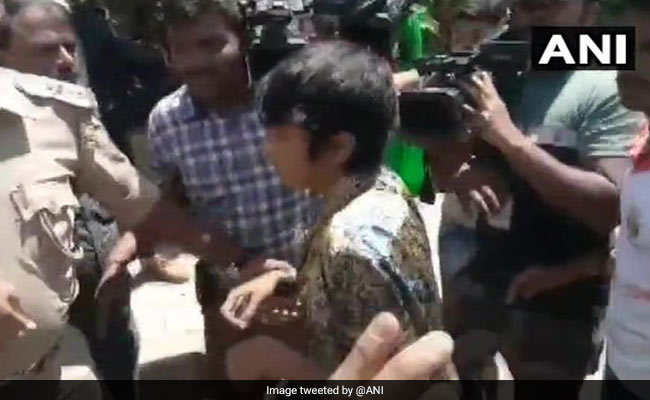 She was escorted out of the place as the organisers asked her to leave, police said

A day after pro-Pakistan slogans were raised by a protester at an anti-CAA event in Bengaluru, a young woman was taken away by the police on Friday for holding a "Kashmir Mukti (liberation), Dalit Mukti, Muslim Mukti" placard at a counter protest in the city, police said.

Holding the placard with the slogans, she was spotted sitting along with agitators at a protest organised by the Hindu Jagaran Vedike against the woman who shouted "Pakistan Zindabad" on Thursday.

City police chief Bhaskar Rao said she was escorted out of the place as the Vedike members asked her to leave and crowd started gathering.

"She has been now been taken into custody for her own safety along with the placard... We will find out her background, where she has come from and who are behind her, among other things," Mr Rao told reporters, adding that she did not raise any slogans.

The "Kashmir Mukti (liberation), Dalit Mukti, Muslim Mukti" slogans were written in both Kannada and English in the placard held by her.

Asked if she would be arrested, the Commissioner said let the investigation begin. "It is too early as she has just been taken into custody," he added.

Last evening, Amulya Leona had raised "Pakistan Zindabad" slogan thrice in the presence of All India Majlis-e-Ittehadul Muslimeen (AIMIM) chief Asaduddin Owaisi after the organisers of the event under the banner of "Save Constitution" invited her to address the gathering, prompting him to denounce her act.

After being removed from the stage, she was later arrested on charges of sedition and produced before a magistrate court which remanded her to 14 days judicial custody.

Mr Owaisi had said he would not have participated in the protest against the Citizenship Amendment Act had he known that the woman had been invited for the event and asserted his party had no links with her.