At Bengaluru Restaurants, 'BoB' The Robot Is A Bigger Draw Than Food

BoB is a robot waiter that is now being tried out at a handful of Bengaluru's dining joints.

Bengaluru: Famous for its chic eateries and pubs, a select few Bengaluru restaurants have a new attraction for their patrons these days. BoB (Butler "O" Bistro) is a robot waiter that is now being tried out at a handful of the Garden City's dining joints. It is not exactly R2D2, the much loved fictional robot character in the Star Wars series, but the BoB has already created quite a buzz.

"It seems a little strange when a robot brings our food order. But it is doing its job really well," said a customer.

In a city that proudly claims to be the robotic hub of India, BoB is the first robot designed indigenously. The project by Kidobotikz, is still at the prototype stage. As of now only one robot is ready, and it is being demonstrated at various restaurants after they are granted permission to serve guests. The robot is demonstrated at a restaurant for approximately two hours after which it is taken to the next one.

But the enthusiastic students dream of the day when the friends of BoB will take over at other restaurants of the city. 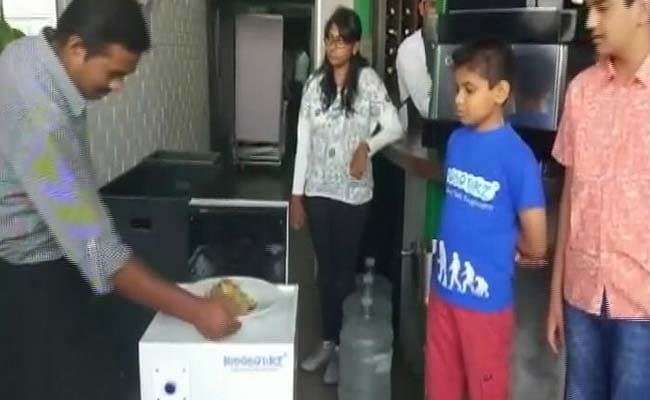 BoB has already created quite the buzz among the customers.

Ashish A, one of the students who worked on the project, said, "I did the designing and mechanical parts and a bit of electronics."

"My role was the programming role and I wrote a small programme, so it can trace a black line," said his friend Arjun Varma.

Engineering student Asha Jayasimha contributed too. "I have designed the facial expressions and how it traces the black line," she said.

Even the online community pitched in to help the students with the work on this robot.

Robotics has wide application in India - its biggest use being in medicine. A substantial number of surgeries, including heart operations, are done by robots in India's top-notch hospitals. It is Bengaluru which is the first stop for robots manufactured abroad.

The city is home to three top robot importers -- Fanuc, ABB and Yaskawa.

Promoted
Listen to the latest songs, only on JioSaavn.com
The subject is taught at the city's Indian Institute of Sciences and significant research is done at defence research organisation DRDO's Centre for Artificial Intelligence and Robotics or CAIR.

Sneha Priya, the chief of SP Robotics, said, "The commercial production has not yet kick-started. Once the technical team has more features embedded into it, we look forward to some patents which we can register in their names".