Bengaluru Rain: The heavy rainfall has led to waterlogging and uprooting of tress in some areas. 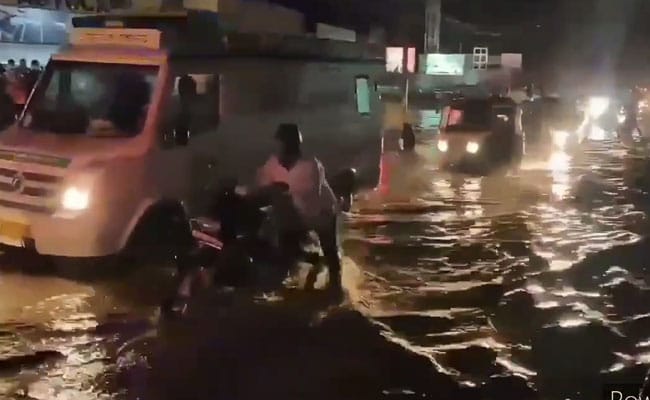 Karnataka Deputy Chief Minister Dr Ashwath Narayan took an assessment of the damage caused by the torrential rain by visiting some of the areas of Bengaluru that had seen a rain impact, including Gurudutt's Layout in Rajarajeshwarinagar.

"Isolated incidents were reported in about eight places adjacent to storm water drains and some of the lakes because of the heavy rain. We had rains between 75 mm to 150mm. Our administration and BBMP has worked effectively to ensure safety of people. We need to do further remodelling and strengthening of the storm water drains. This is because of concrete jungles. It is happening in many cities. We need to address the problem and will take it on top priority. 10 years or 12 years back it would flood entire areas. That is not happening now," Dr Narayan, who was accompanied by BBMP Commisisoner, Manjunath Prasad,  told NDTV.

The heavy rainfall has led to waterlogging and uprooting of tress in some areas. A portion of Storm Water Drain (SWD) wall in Gurudatta Layout near Hosakerehalli also fell due to heavy rain.

"BWSSB (Bangalore Water Supply and Sewerage Board) has dug the road but has not completed it properly. That is why the problem was created. Because of rain, the wall has fallen down. The water which has entered the BWSSB work, it has fallen. We can't enter inside our house. As soon as we heard a sound, we came out. Now we can't enter our house," a resident told NDTV.

Some residents had to move out of houses that were in danger due to the collapse of a wall.

Another resident Anupallavi said, "Both BWSSB and BBMP (Bruhat Bengaluru Mahanagara Palike) work was going on. The road is actually small. They had filled it with mud and there was no space for the water to go. We can't go into our house now. We have been outside since 10.30pm last night.

BBMP Commisisoner Manjunath Prasad, however said the situation was not too bad.

"Bengaluru is a city of 800 square kilometres. In just 7,8 low lying areas the water is there because of heavy rain. This retaining wall was built about 20 years back and we are in the process of replacing it. Because of heavy rains, the old wall has collapsed. Within one month the wall will be constructed. Two buildings have been affected and we are making alternate arrangements for the residents," Mr Prasad told NDTV .

Low lying areas of Bengaluru often face the impact of heavy rain. Over the years, the city has lost many of its lakes which were filled in - both legally and illegally - and converted into construction sites. These areas tend to hold on to the rain when it comes. Storm water drains have also been choked with garbage and construction debris. Add to this, illegal encroachment on these drains have led to severe flooding. Over the years, there have been many drives to clear these illegal constructions.