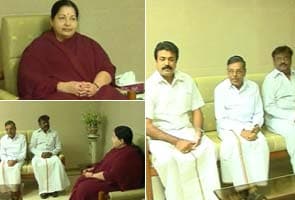 Chennai: Putting at rest all speculation, DMDK on Friday evening signed a poll pact with the main opposition party AIADMK, led by Jayalalithaa, to contest the Tamil Nadu assembly elections scheduled for April 13.

DMDK founder-president Vijayakanth along with party presidium chairman Panruti Ramachandran and Youth wing secretary Sudheesh called on Jayalalithaa at her Poes Garden residence in Chennai, to cement the pact under which the party had been allotted 41 seats, a joint statement released to the media said.

On February 24, actor-politician Vijayakanth's DMDK had launched formal poll parleys with AIADMK to "oust DMK from power". Though backdoor negotiations were going on for some time, it was the first time that leaders of both parties had met to initiate poll talks.

Though Vijayakanth has been consistently holding that his alliance was only with the people and no other political party, the DMDK, however, opted for tie up under pressure from party cadres.

Founded in 2005 by Vijayakanth, DMDK made its debut in 2006 Assembly elections, with Vijayakanth winning from the Viruddhachalam seat, even as his party polled 8 per cent popular votes.

However, the party's performance in the subsequent by-polls and 2009 Lok Sabha polls were sub-par, even as it played spoilsport to AIADMK's prospects by splitting the votes.
Comments
DMDK-AIADMK allianceJayalalithaa and Vijayakanth