Tejashwi Yadav also hinted that there was a contradiction between the claims of the BJP and the JDU. 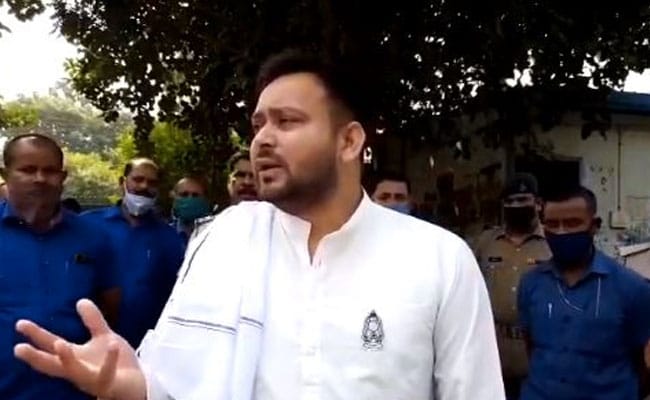 The Mahagathbandhan's chief ministerial candidate Tejashwi Yadav has upped the ante against Bihar Chief Minister Nitish Kumar, calling him the Bhishmapitamah of corruption and accusing him of shielding perpetrators.

"When I come to power, I will recover all the money. Rs 30,000 crore has been looted which belongs to the public. Nitish Kumar safeguarded those who indulged in corruption. They all are partners of that corruption and that is why I say Nitish Kumar is Bhishmapitamah of corruption," Tejashwi Yadav told ANI exclusively.

Mr Tejashwi took on the poll promise of the BJP of providing 19 lakh jobs and said, "We talked about government posts which are vacant in the education department, health department, police department and home ministry. We are telling the time when we will provide government jobs. I will do this in my first cabinet meeting. For BJP even ''pakoda'' making is an employment. BJP says they will try. BJP promised 2 crore jobs, promised special status to Bihar and special package. What happened to that?"

The RJD leader also hinted that there was a contradiction between the claims of the BJP and the JDU. He said on one hand the Sushil Kumar Modi says government doesn''t have money for jobs but BJP promises 19 lakh jobs which is 9 lakh more than what the Yadav scion's promised.

"They mocked me for giving 10 lakh jobs. On one hand, Nitish Kumar asks where is the money and on the other announces 19 lakh jobs. There is a contradiction," he added.

In 2017, a Rs 880 crore corruption scandal engulfed Bihar and plunged its government in crisis. Chief Minister Nitish Kumar and the BJP are fighting charges levelled by the opposition Rashtriya Janata Dal (RJD).