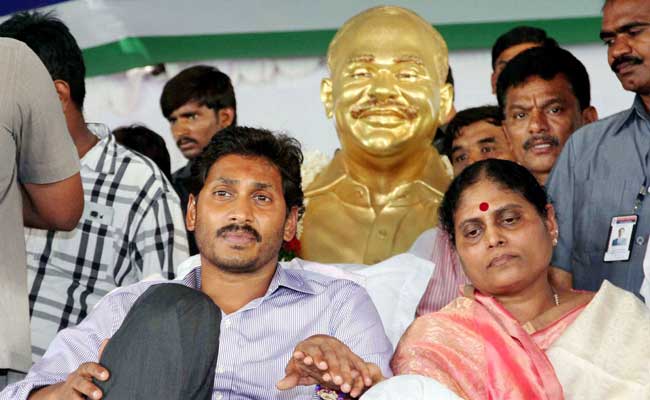 YSRC president YS Jaganmohan Reddy with his mother Vijaya Lakshmi during the indefinite fast for special status to Andhra Pradesh, at Guntur near Vijayawada on Saturday, October 10, 2015. (Press Trust of India photo)

Large number of party workers gathered at the hunger strike camp at Guntur near Vijayawada as his condition has weakened. A team of doctors examined Jagan, as the leader is popularly known, thrice today. YSRCP leaders and workers are concerned over the condition of their leader.

According to party sources, Mr Reddy has lost two kg weight. The doctors are closely monitoring his blood pressure and sugar level. The leader was spending most of the time lying on the ground.

Mr Reddy has vowed to continue his fast till the central government comes forward to accord special status to the state. Party leaders want the Centre to respond immediately in view of Mr Reddy's deteriorating condition.

YSRCP has blamed both the Bharatiya Janata Party-led central government and the Telugu Desam Party-led state government for the delay in the state getting special status.

Mr Reddy, also the leader of opposition in the state assembly, has said the state can achieve the development at par with neighboring states only if it gets the special status. He alleged that both BJP and TDP have gone back on their poll promise on special status.