Doctors attending him had said Jagan Mohan Reddy received a lacerated injury on his shoulder and had to undergo a surgical procedure. 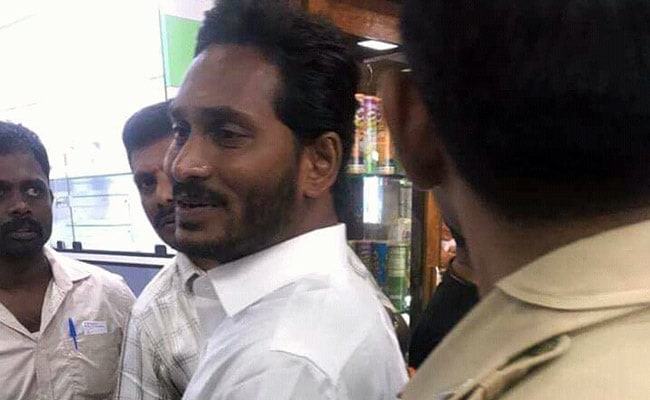 The YSR Congress leader escaped with a "deep" cut on his left shoulder.

YSR Congress president Jagan Mohan Reddy, who was injured in a knife attack at the Visakhapatnam airport, was discharged from a private hospital here Friday.

Doctors attending him had said he received a lacerated injury on his shoulder and had to undergo a surgical procedure.

Mr Reddy, Leader of Opposition in the Andhra Pradesh Legislative Assembly, who checked into a private hospital in Hyderabad Thursday, was discharged in the afternoon, hospital sources said.

Mr Reddy was injured in a knife attack by a chef employed at a restaurant allegedly owned by a ruling TDP leader at the Visakhapatnam airport, police said.

The YSR Congress leader escaped with a "deep" cut on his left shoulder.

The attack took place when Mr Reddy was leaving the VIP lounge to board a flight to Hyderabad.

J Srinivasa Rao (30), the assailant, approached Mr Reddy when he was leaving and requested for a 'selfie'.

As an unsuspecting Reddy posed for the picture, the man pulled out a small knife generally used in cockfights and plunged it into his left shoulder.

Rao was overpowered by CISF personnel guarding the airport and handed over to the state police which is now questioning him.

"To everyone worried about my safety, Id like to inform you that I am safe. Gods grace and the love, concern and blessings of the people of Andhra Pradesh will protect me.

"Such cowardice will not dissuade me but only strengthen my resolve to work for the people of my state," Mr Reddy had tweeted on his arrival in Hyderabad Thursday.