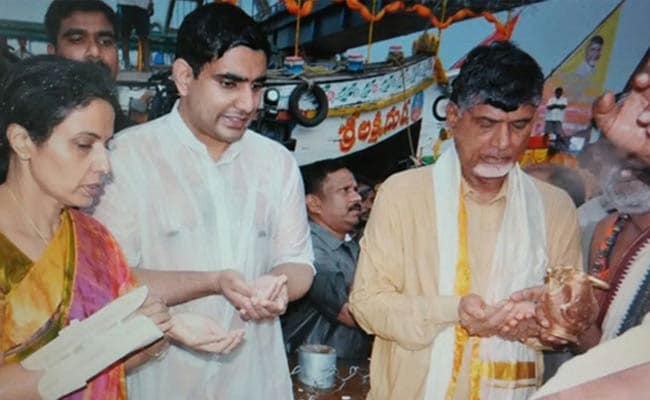 Andhra Pradesh Chief Minister Chandrababu Naidu takes a dip in the river Godavari on the occasion of 'Maha Pushkaralu'.

Hyderabad: A vocal concert by eminent Carnatic singer M Balamuralikrishna, a group dance of 'Kuchipudi', a scintillating laser show and a colourful and pious 'arti' were some of the highlights of the concluding events of the Godavari 'Maha Pushkaram' in Andhra Pradesh tonight.

Yoga guru Baba Ramdev and Chief Minister N Chandrababu Naidu were among the audience, who thronged in huge numbers to the ghats of the Godavari river in Rajahmundry for the 'arti'.

A record 4.60 crore people have taken holy dip in the river till 11 am today, the last day of the 12-day-long religious festival, according to Information Minister Palle Raghunatha Reddy.

Mr Naidu felicitated Mr Balamuralikrishna after an enthralling concert by the latter. BJP General Secretary Ram Madhav, a native of East Godavari district, was present on the occasion.

Though the 'Pushkaram' (the ritual of taking holy dip in river) had a horrific start in the state with 27 people losing their lives on the opening day on July 14 in a stampede, crores of people thronged the bathing ghats during the 12 days.

Trains and buses to East and West Godavari districts from different places in AP and Hyderabad ran chock-a-block.

Heavy rush of private vehicles was witnessed on the highways leading to the 'Pushkaram' ghats.

Many voluntary and charitable organisations provided distribution of food, water and butter milk to the devotees.

Mr Naidu stayed put at Rajahmundry during the 12 days in the wake of stampede incident. The state cabinet held its meeting at Rajahmundry this week.
Comments
Chandrababu NaiduBaba RamdevPalle Raghunatha ReddyRam MadhavMaha PushkaramBalamuralikrishnaHyderabad