Andhra Pradesh boat tragedy: Most of those on the boat were from Telangana. Officials said 22 of the tourists were from Hyderabad and 14 from Warangal. 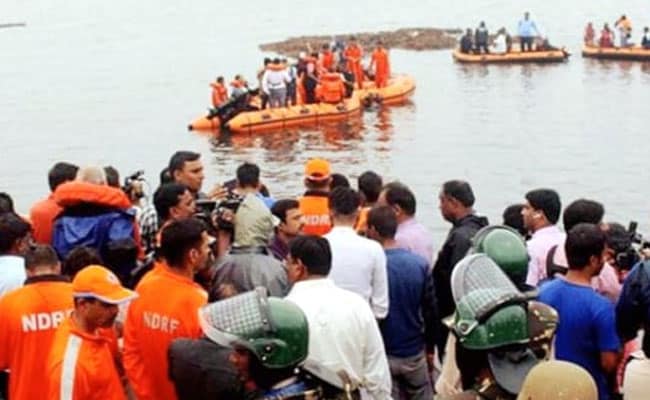 The accident took place around 1:20 pm near Kacchuluru village in Devipatnam Mandal.

A day after a boat carrying 73 people capsized in Godavari River in Andhra Pradesh, killing 12 onboard, rescue officials -- who managed to rescue 27 people yesterday -- resumed operation early this morning to locate the remaining people. At least 30 people are still missing in the boat tragedy which took place near Kacchuluru village, about 200 km from Amravati. The search operation to locate them was called off late Sunday because of low-light conditions.

Two helicopters and eight boats with deep divers from the Indian Navy began search operation at 5:45 am today. They are being assisted by a team of the National Disaster Response Force (NDRF). A specialized deep divers team with "Side Scan Sonar" equipment from Uttarakhand will join the search operation later in the day.

The tourist boat "Royal Vasishta" had started off for the picturesque Papikondalu hill range, a prime tourist destination, from Gandi Pochamma Temple near Devipatnam.

The accident took place around 1:20 pm near Kacchuluru village in Devipatnam Mandal, about 200 km from Amravati.

Though life jackets were available on the boat, many passengers were not wearing life jackets. The driver it appeared was not familiar with the dangers of Kachchluru  area where the accident took place as he was not a local, officials said. The crew appeared untrained in dealing with the emergency.

Chief Minister YS Jaganmohan Reddy has undertaken an aerial survey of the area and will also visit the injured in the hospital. He has announced a compensation of Rs 10 lakh to family of those killed in the tragedy.

Most of those on the boat were from Telangana. Officials said 22 of the tourists were from Hyderabad and 14 from Warangal.

Jana Sena party leader Pawan Kalyan has blamed the government for failing to issue instructions not to allow any tourist boats in the Godavari River, which has swelled in the past few days with over 5 lakh cusecs of floodwater flowing on Sunday afternoon when the incident took place.

Others criticised the driver for taking that route. State tourism minister Muthamsetty Srinivasa Rao said the capsized boat did not have necessary permissions. The boat owners, however, claim that they had all requisite permissions. They also added that the boat was not overcrowded and all the people were provided with life jackets.

Eyewitnesses said though there were life jackets available, some of them took it off as it was very hot.

People who managed to wear a life jacket were able to save themselves, they said.

A woman from Tirupati said she survived as her husband had passed on a life jacket to her when the danger struck. However, her husband and her 12-year-old daughter has been missing since.

" What is the point of my living without the two of them," she cried.

Officials said that the boat may have sunk to a depth of at least 300 feet and some bodies may be stuck inside.