The House witnessed a heated debate when members were supposed to speak, congratulating the new Speaker. 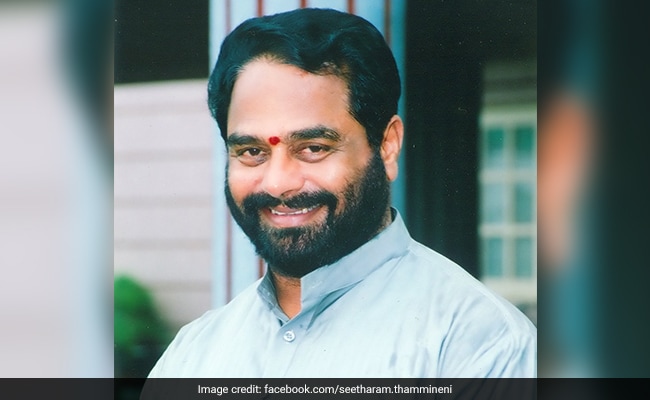 Verbal volleys flew thick and fast in the Andhra Pradesh Assembly today as the issue of political defections and conduct of the previous Speaker dominated the discourse soon after the House elected the new Speaker Tammineni Sitaram.

Beginning with the Leader of the House, YS Jaganmohan Reddy, members of the ruling YSR Congress recalled how the previous Speaker Kodela Sivaprasada Rao conducted the House in a "totally biased and arbitrary" manner, in utter disregard to laws and rules.

The House witnessed a heated debate when members were supposed to speak, congratulating the new Speaker.

At the end of it, the Speaker wanted the AP Assembly to become a trendsetter in effectively enforcing the Anti-Defection Law, but hoped he would not get to apply it in the current House.

The Speaker said the people "elected us all" with a lot of faith and asked the members not to betray it.

Earlier, congratulating Mr Sitaram on his election as Speaker, the Chief Minister made a mention of the defection of YSRC legislators into the TDP in the last House.

The previous TDP government turned the Assembly into a House, where the Constitution or laws did not matter, the Chief Minister alleged.

He then referred to the defection of 23 YSRC lawmakers into the then ruling Telugu Desam Party and how four of them were even made ministers in the Chandrababu Naidu Cabinet.

"The previous government purchased 23 of our MLAs like cattle. Four of them were made ministers. We sought their disqualification under Anti-Defection Law but they didn't care," Jagan pointed out.

"People have disqualified that government which refused to disqualify the defectors. We have seen it in the recent elections," he added.

In a mock observation, Mr Reddy remarked that "God had written such a beautiful script" that the TDP was left with only 23 MLAs and three MPs now (the exact number of MPs it took away from YSRC in the last term).

"That is the beauty of democracy and beauty of God's grace. We are seeing that in the House today," he said.

Mr Reddy also said someone suggested that he lure five or six TDP lawmakers into the YSRC fold to deprive Naidu of his opposition status.

"I replied that there will be no difference between me and Chandrababu Naidu if I do that," he added. The YSRC president claimed that some of the newly-elected TDP lawmakers were ready to jump the ship.

"I don't want to reveal how many TDP MLAs are in touch with me. If I start luring MLAs, the TDP will not even have opposition status. But I will not do that.

If someone wants to come and join us, they have to first resign from their post," Jagan maintained. He requested the Speaker to disqualify such legislators even if they defect by mistake.

Leader of Opposition N Chandrababu Naidu, who initially refused to be drawn into the duel, later sought to hit back at Jagan, recalling that the latter's late father YS Rajasekhara Reddy defected to Indira Congress in 1978, days after getting elected as the then Reddy Congress lawmakers.

"You claim to be his heir but first know your father's history and how his defection was widely criticized by stalwarts of those times," Mr Naidu pointed out.

He asked Jagan to admit what his father did was wrong. Members on either side then continued the slanging match and at one point the House was caught in a din when YSRC lawmaker Chevireddy Bhaskar Reddy made a certain remark at the TDP legislators.

Speaker Sitaram intervened and said he would examine the records and expunge such remarks found objectionable.

The House was subsequently adjourned for the day. Governor ESL Narasimhan would address a joint session of the Legislative Council and the Assembly on Friday.