A collision happened between a tourist bus and a Ford Gurkha in Andhra Pradesh's Kurnool district. 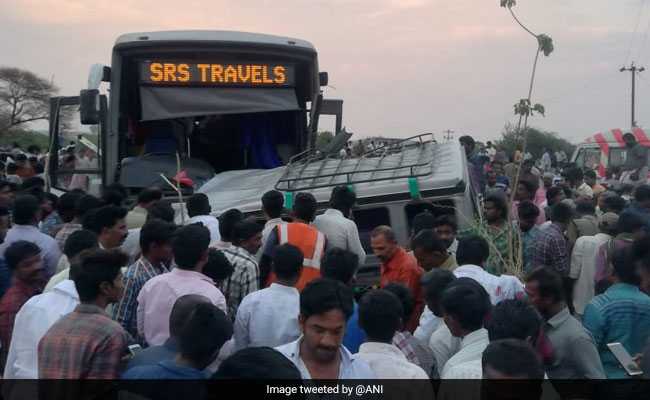 People crowd around the vehicles after they collided in Andhra Pradesh's Kurnool today.

Thirteen people were killed several others injured after a speeding tourist bus crashed into an SUV in Andhra Pradesh's Kurnool district today.

Pictures of the accident, released by news agency ANI, show people crowded around the vehicles, a white and yellow tourist bus and a Ford Gurkha. Under impact of the collision with the bus, the SUV is seen tilted on one side.

News agency PTI reported that the bus, going to Bengaluru from Hyderabad, crashed into the SUV as it tried to avoid collision with a two-wheeler. The police said that the collision was so strong that 10 people died on the spot.

"The jeep was badly mangled. Many passengers were trapped inside. We pulled out four injured passengers and shifted them to the government hospital in Kurnool for treatment," a senior police official told PTI.

Police said that all the people who died in the accident were related and were returing home after attending a wedding. They were from a village in Telangana. Some of the bus passengers received minor injuries.

Andhra Pradesh Chief Minister N Chandrababu Naidu condoled deaths in the accident. "Authorities have been ordered to provide immediate treatment to to the injured. I express my deepest condolences to the families of the deaf," he tweeted.

Prime Minister Narendra Modi's office's tweeted on his behalf, "The road accident in Andhra Pradesh's Kurnool is deeply unfortunate. My thoughts are with the bereaved families. I hope the injured recover quickly."