After Ruling Out Investigation, Railways Agrees To Probe Amritsar Tragedy

Railways said the accident has "become a matter of great public discourse", especially raising concerns about the safety of people trespassing on railway tracks. 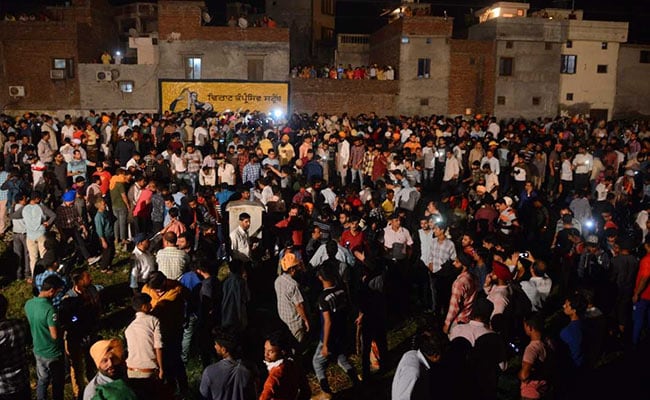 Sixty people were crushed to death by a train coming from Jalandhar, in Amritsar on October 19 (File)

The Chief Commissioner of Railway Safety will probe the Amritsar tragedy in which 60 Dussehra revellers were mowed down by a passing train, the Indian Railways said Friday, nearly two weeks after it had ruled out any investigation into the tragedy.

A day after the accident on October 19, the railways had termed it a "case of trespassing".

The probe will begin Sunday (November 4), according to a notification issued by the Northern Railway.

Through the notification, the railways has invited people who have information regarding the accident to depose before the Chief Commissioner of Railway Safety (CCRS), Sailesh Pathak, at the premises of the Railway Mechanical Workshop, Amritsar. It will continue till November 5.

Despite refusing a CRS probe earlier, in a statement Friday, the railways, however, said since the CCRS can conduct an inquiry even in those cases where it is not mandatory as per law and rules, it will do the same in this case as well.

It said the accident has "become a matter of great public discourse", especially raising concerns about the safety of people trespassing on railway tracks.

"Gurjeet Singh Aujla, MP from Amritsar, met Minister of Railways Piyush Goyal and personally handed over his letter dated October 23 and requested for an inquiry by Commissioner of Railway Safety (CRS) in this incident. The Ministry of Railways has considered this request and other facts, circumstances and legal provisions," the railways said.

It said according to law, it is not mandatory to conduct an inquiry by Chief Commissioner of Railway Safety in such cases, but it is not impermissible either.

Chief Commissioner of Railway Safety, Lucknow, has ordered a statutory inquiry into the circumstances that led to the accident, the railways said but added that prima facie the transporter does not appear to be responsible for the accident.

The Commission of Railway Safety, working under the administrative control of the Ministry of Civil Aviation, deals with matters pertaining to safety of rail travel and train operation. It is charged with statutory functions as laid down in the Railways Act (1989), which are of an inspectorial, investigatory and advisory nature.

Sixty people were crushed to death by a train coming from Jalandhar on October 19, when they were watching an effigy of Ravana being burn at a ground near railway tracks at Joda Phatak.

The railways had washed its hands off the matter, saying that it had not been intimated about the Dussehra event in advance and had pointed out that the spectators on the tracks were trespassers.

It had neither ordered a probe nor paid any compensation in the case. Days after the accident, the railway board and Manoj Sinha, the minister of state for railways, had termed the tragedy a case of trespassing.