Read inOther Languages
This Article is From Oct 20, 2018

30 Seconds Before Train Ran Over 60 In Punjab, Another Passed By Slowly

Amritsar train accident: Hundreds had gathered at Joda Phatak for Dussehra celebrations and were also standing on the tracks, on higher ground, for a better view of the burning Ravan effigy

The train accident in Amritsar was caught on videos by eyewitnesses on cellphones.

Barely 30 seconds before a train ran over 60 people celebrating Dussehra in Amritsar on Friday evening, another train had passed by in the opposite direction, slowly. The first train that started from the Amritsar railway station, about two kilometres from the accident site, was headed to Howrah in West Bengal. The second train, which was much faster, was headed from Jalandhar to its final destination, Amritsar.

Hundreds had gathered at Joda Phatak for Dussehra celebrations and were also standing on the tracks, on higher ground, for a better view of the burning Ravan effigy.

A mobile phone video, shot by one of the hundreds watching the celebrations from the tracks, shows the first train cross right before the Ravan effigy was lit. Seconds after the fireworks went off, a section of the crowd retreated towards the tracks, where a large number of people were already standing to watch the celebrations. The train coming from the opposite direction this time, rammed them. The victims could not hear the train's siren and those who did see the train coming, couldn't react in time.

Railway Board Chairman Ashwani Lohani, who visited the accident site this morning, refused to take responsibility of the tragedy and said they were not intimated about the Dussehra event. "It was a clear case of trespassing," he said.

Locals, however, claim that the event had been taking place at the same spot, barely 100 metres from the tracks, for the last two decades, except for last year.

Mr Lohani said the Jalandhar-Amritsar Diesel Multiple Unit (DMU) passenger train that ran over the crowd was running at its assigned speed and its driver had applied brakes to slow it down. 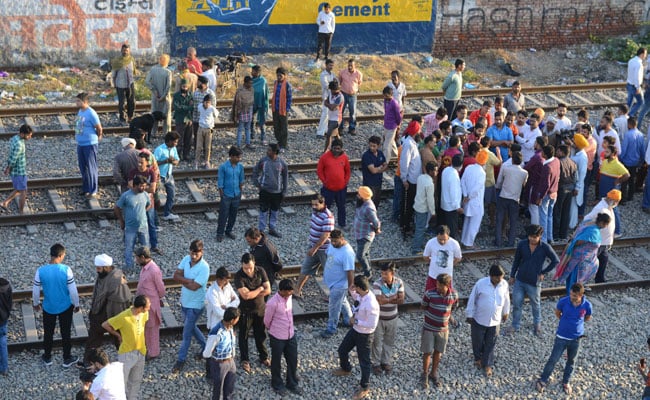 Ravan effigy was being burnt less than 100 metres from the railway track. (AFP)

"Trains run at their assigned speed and people are not expected to go on the tracks. There was no intimation to the railways regarding this (Dussehra) event adjoining the railway track," Mr Lohani told reporters, according to news agency IANS.

Mr Lohani said the accident site falls under the "mid-section of the two stations" where the trains run at their "assigned speed".

When asked about the responsibility of the driver, Mr Lohani said, "Our initial report suggests that the loco-pilot applied the brakes and the speed came down from 90 kmph to around 60-65 kmph. We are still looking at the speedometer charts."