Deputy Chief Minister Nitinbhai Patel also offered prayers in the temple along with Rupani to seek blessings of Lord Jagannath for good health, happiness and prosperity for all. 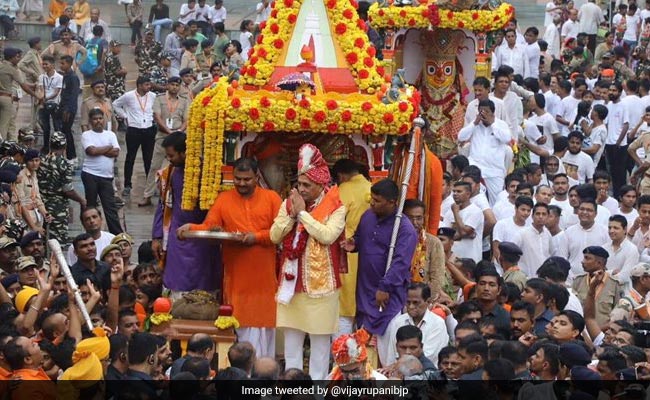 The 142nd rath yatra of Lord Jagannath Thursday commenced in the city amid tight security as lakhs of devotees flocked the 18-km route to catch a  glimpse of the deity.

Before the procession began, Gujarat Chief Minister Vijay Rupani performed ''pahind vidhi'' - a symbolic ritual of cleaning the way for the chariots using a golden broom.

Deputy Chief Minister Nitinbhai Patel also offered prayers in the temple along with Mr Rupani to seek blessings of Lord Jagannath for good health, happiness and prosperity for all.

In the early hours, Union Home Minister Amit Shah took part in ''mangla aarti'' (auspicious ritual to pay obeisance to Lord) of the deities in the temple.

The chariots of Lord Jagannath, his brother Balbhadra and sister Subhadra, then embarked on the yatra from the 400- year-old Jagannath temple located in Jamalpur area.  Prime Minister Narendra Modi greeted people on the occasion.

"Best wishes to everyone on the special occasion of the Rath Yatra. We pray to Lord Jagannath and seek his blessings for the good health, happiness and prosperity of everyone. Jai Jagannath," he said in a tweet.

Besides the three chariots, the rath yatra procession comprised 19 decorated elephants, 100 trucks with tableaux and members of 30 singing troupes.

The rath yatra is taken out every year on Ashadhi Beej, the second day of Ashadh month, as per the Hindu calender.

The procession will return to the temple around 8.30 pm after passing through the Old City, including some communally sensitive areas like Jamalpur, Kalupur, Shahpur and Dariyapur.

A multi-layered security cordon involving 25,000 personnel from different police units and para-military forces has been put in place. CCTVs and drone cameras are being used to keep a watch on the procession.