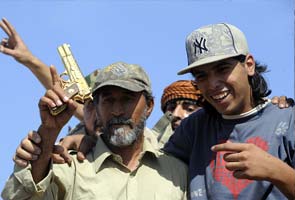 Misurata, Libya: They had the ultimate trophies of the revolution: the colonel's golden gun, his satellite phone, his brown scarf and one black boot.

A small group of fighters from Misurata, the vanguard of the force attacking Colonel Moammar el-Gaddafi's former hometown and final hide-out, Sirte, said they had stumbled upon him hiding in a drainage pipe. He was bleeding from his head and chest, but he was well enough to speak, with his trademark indignation.

"When he saw us, he said, 'What's happening?' Those were the words that he spoke," said Omran Shaaban, a 21-year-old Misurata fighter who said he and a friend were the first men in their unit to find the colonel.

On Thursday night, Mr. Shaaban, a student wearing a brown leather jacket, and his colleagues celebrated their victory in the local council meeting room here, hugging one another and passing around the colonel's prized last possessions. It was a windfall of spoils for the young men, who have lived only half as long as Colonel Gaddafi ruled Libya, and for Misurata, the Mediterranean port city that is their hometown.

Misurata suffered grievously under a long siege by Colonel Gaddafi's troops in the spring. It responded with rage, sending out its battle-hardened fighters, first to capture Tripoli and, on Thursday, Sirte. As the bodies of the colonel and his son Muatassim were displayed for onlookers here in private homes on Thursday night, it struck many Misuratans as a fitting end, providing a measure of comfort to a brutalized city - and a bargaining chip for its place in a post-Gaddafi Libyan government.

"Misurata will sleep very happily tonight," said Dr. Suleiman Fortia, a member of the Transitional National Council from the city.

At the house where Muatassim Gaddafi's body was being displayed, a man who had come to see put it more simply. "Thank God that we caught him," he said.

It remained to be seen whether Misurata's achievement would soothe resentments against the city that are lingering from the war. Its fighters threw their weight around in Tripoli and were enthusiastic looters of vanquished loyalist cities. Traveling to Misurata in recent weeks practically required a visa. Their neighbors in the city of Tawerga, accused of fighting in support of Colonel Gaddafi, fled their city in August having been told by the Misuratans that they should not return.

The early battles of the uprising forged a formidable fighting force. Misurata's rebels became known for their relative skill in urban combat and their convoys of black pickup trucks with heavy weapons mounted in the back. When Tripoli fell, it was the Misurata fighters who led the storming of Bab al-Aziziya, the colonel's fortified compound and a symbol of the regime's power.

Misurata's leaders have pushed for a leading role in the constellation of former rebel forces that have made rival claims to control Libya's armed forces, and they insisted at one time that the prime minister be from Misurata.

Dr. Fortia tried on Thursday to be conciliatory. "It was teamwork," he said. "But we deserve the cup."

The Misurata fighters who caught Colonel Gaddafi set out at about 10 a.m. on Thursday to support the final assault on Sirte, according to Munir Senussi, 21, one of the fighters. "We used the coast road," he said. "We were told it was empty." But instead, they found the remains of a convoy that had been hit by a NATO airstrike. "We started to hit them with heavy weapons," he said. "We had no idea Gaddafi was there."

Mr. Shaaban, the soldier who said he had found the colonel, said that he and the other fighters jumped on him, but he insisted that Colonel Gaddafi's mortal wounds were already visible. The bodies of other men were near the drainage pipe, he said, but none of them were the colonel's sons.

Colonel Gaddafi was carrying what Mr. Shaaban described as a sack of magic charms. He had a silver pistol in his hand, and in a bag, the fighters found the golden gun.

On Thursday night, Mr. Shaaban looked around at his friends, young men caked in dirt or blood but smiling, congratulating one another on a job well done. "Bring the gun!" Mr. Shaaban said.

Amid the other souvenirs of war, the big prize was Colonel Gaddafi's body, shuttled around Misurata on Thursday, moved at least once when the crowds gathering to see it grew too large. By the late evening, the body had come to rest in the reception room of a pink villa. Scuffles broke out at the door as local military leaders came to take a look and snap pictures.

He had what appeared to be a small wound just below his chest and what looked like a gunshot wound to his left temple. His face was clean, but his arms were caked with blood. Several visitors tugged at his signature locks.

The exact circumstances of Colonel Gaddafi's death were not known. But the fighters toyed with his body, banging the head up and down, flashing the victory sign. "This was the opportunity of my life," said the owner of one house to which the bodies were taken, who refused to give his name. "If I die tomorrow, I'm happy."

Promoted
Listen to the latest songs, only on JioSaavn.com
Ali Tarhouni, the interim government's finance and oil minister, came to Misurata to confirm the colonel's death on behalf of the cabinet. Mr. Tarhouni had met Colonel Gaddafi when he was a student. "He didn't look very powerful," he said, after seeing the body.

"I was looking at the corpse," Mr. Tarhouni said, "and thinking of all the comrades and friends who spent decades fighting him, that didn't live to see this day."