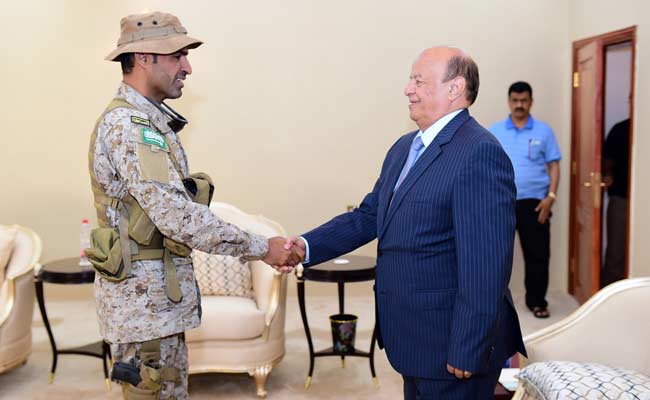 Yemeni President Abedrabbo Mansour Hadi shakes hands with Abdullah bin Sahyan, who commands the Saudi forces in Yemen's southern port, after he was awarded with a medal of courage on December 12, 2015 in Aden. (AFP)

Aden: A ceasefire in Yemen is set to begin today at midnight on the eve of UN-brokered peace talks in Switzerland, a government delegate at the negotiations told AFP.

"We hope the militias will commit to the ceasefire this time," said Mueen Abdulmalek referring to Iran-backed rebel forces in Yemen.

A presidency official confirmed the truce would begin at midnight local time (2100 GMT) based on an agreement between President Abedrabbo Mansour Hadi and Yemen's UN envoy Ismail Ould Cheikh Ahmed.

However, it remains unclear if Huthi rebels and allied forces -- renegade troops still loyal to former strongman Ali Abdullah Saleh -- would commit to the halt in fighting.

On Saturday, a spokesman for the Huthi's Ansarullah party, Mohammed Abdulsalam, said fighters would only lay down their arms if "aggression" by a pro-Hadi forces stopped.

There was also no word from a Saudi-led coalition, which has conducted air strikes against the rebels since March, despite reassurement last week by the UN envoy that Riyadh had promised to pause its aerial assault during talks.

A lull in fighting is sorely needed in Yemen, the Arabian Peninsula's poorest nation, where an estimated 80 percent of the population of 26 million is in need of aid.

The United Nations says more than 5,800 people have been killed in Yemen, about half of them civilians, and more than 27,000 wounded since March.