Year On From Bombings, Brussels Remains On Alert 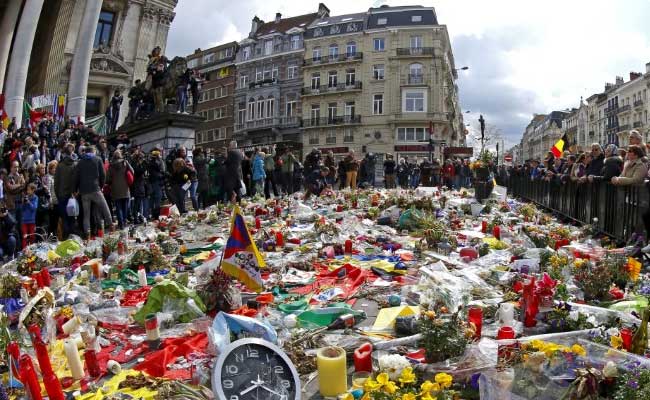 Brussels: A year after ISIS suicide bombers killed 32 people in Brussels, Belgian authorities say much remains unclear about who ordered the attacks, even if those who staged them are either dead or in jail.

The March 22 bloodshed in Brussels hit Zaventem airport and a metro train, four months after bombings and shootings in Paris that killed 130 people. Both sets of attacks were carried out by related cells of young Muslims, some of whom had returned from fighting in Syria.

Since then, Belgium has remained on high alert as it tries to curtail threats both at home and from militants who may return from the Middle East.

"We will only have certainty when the situation in Syria and Iraq is resolved," one senior official said of the inquiries into the Brussels attacks. Those two countries have attracted over 400 Belgians to join the ranks of terrorists, according to a study by the Hague-based International Centre for Counter-Terrorism.

That figure makes Belgium one of the biggest contributors to foreign terrorists in the Middle East in proportion to its population.

As the Belgian capital prepares to mark Wednesday's anniversary with ceremonies timed to the moment the bombers struck, authorities are still unsure just who in the ISIS group organised and ordered the attacks, even though 59 people are in custody and 60 on bail.

Asked about the perpetrators, Belgian Prime Minister Charles Michel told Reuters the investigation was still not completed but added there was little doubt about the ideology inspiring the killings.

"The attacks are inspired by ISIS, they are inspired by a totalitarian ideology that aims to destroy European values," Michel said. "We need to fight this ideology with full determination."

The most recent arrest was in January, of a man suspected of providing forged identity papers to Khalid El Bakraoui, the 27-year-old suicide bomber who killed 16 people on a train at the downtown Maelbeek metro station.

With soldiers still a permanent presence around Brussels' transportation hubs, security officials told reporters in briefings ahead of the anniversary that there was still a risk that armed terrorists were still at large.

For Belgian security services, some communities can remain hard to penetrate, such as the tight-knit Muslim neighbourhood of Molenbeek where the prime suspect of the Paris attacks, Salah Abdeslam, hid near his family home for four months. His arrest triggered his associates to strike Brussels four days later.

Despite efforts to detect and discourage the influence of violent Islamist ideas, young men who engaged in petty crime remain vulnerable to it, officials said. But surveillance over potential terrorists has intensified in the past year, they added.

Only five Belgians were detected trying to leave for Syria last year, with only one succeeding, officials said, marking a contrast from the previous years.

That, however, has raised concerns, a senior security official told reporters, since ISIS appeared to be issuing instructions to followers to "attack infidels at home".

Some 160 Belgian citizens remain in Syria, officials estimate, but some 80 children have been born to them there, creating fears of a new risk.

Promoted
Listen to the latest songs, only on JioSaavn.com
"These children could be tomorrow's danger," the official said. "They've seen atrocities, they've been brainwashed. Some of them already received military training. We really have to work with them on their return."