"None Of The Business Of Foreign Forces": Xi Jinping On Hong Kong, Macau 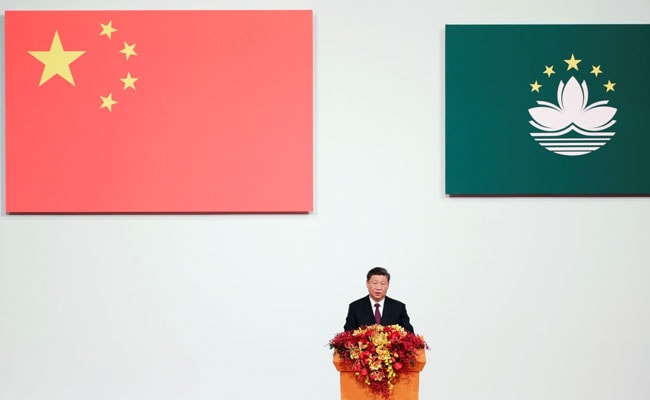 President Xi Jinping said on Friday China would not allow foreign forces to interfere with its special regions of Hong Kong and Macau, as he swore in a new pro-Beijing government for the gambling hub of Macau.

President Xi, speaking at a ceremony marking the 20th anniversary of Macau's handover to Chinese rule, heaped praise on the former Portuguese colony for its patriotism and loyalty but did not refer directly to six months of anti-government protests in the nearby former British colony of Hong Kong.

"I must emphasise, since Hong Kong and Macau's return to the motherland, dealing with these two Special Administrative Region's affairs is entirely China's internal affairs and none of the business of foreign forces," President Xi said.

"We do not let any external forces interfere."

Macau returned to Chinese rule on Dec. 20, 1999, with the same "one country, two systems" formula aimed at ensuring a high degree of autonomy under which Hong Kong is governed.

While protesters in Hong Kong, across the mouth of the Pearl River, are furious about what they see as Beijing's erosion of their freedoms, Macau has seen little dissent.

Beijing denies undermining Hong Kong's autonomy and has repeatedly blamed foreign governments, including the United States and Britain, for stirring up trouble in the Asian financial hub.

President Xi, wearing a black suit and maroon tie, swore in new Macau chief executive Ho Iat-seng and his administration, which will run the enclave of several islands for the next five years.

Ho was selected by a pro-Beijing committee in a similar process to the way Hong Kong's leader is chosen.

President Xi encouraged diversification of Macau's casino-dependent economy, urging it to grasp opportunities brought by a regional investment zone known as the Greater Bay Area. He also stressed further integration with the mainland, although he did not announce any specific steps.

Officials and corporate executives have been expecting Beijing to reward Macau for its loyalty in contrast to the defiance on the streets of Hong Kong with measures including a new yuan denominated stock exchange.

President Xi said Macau's patriotism was "the most important reason" for the success of its "one country, two systems formula of governance".

President Xi said China would be unwavering in the defence of its sovereignty.

"The will of the Chinese government and the Chinese people to safeguard national sovereignty, security and interest in development is rock solid," President Xi said.

"The forward steps of the Chinese nation's rejuvenation are unstoppable."

Macau, with a population of 620,000, has been decked out for the anniversary with national flags and red banners hanging over schools, office towers and draped along roads.

Security and border controls were tight for his three-day visit, which ends on Friday, to prevent any spillover of dissent from Hong Kong.

Journalists, activists and even the heads of the American Chamber of Commerce in Hong Kong were barred from entering the city in the run-up the visit. Macau authorities have not commented on the issue.

Ferry and light rail services have been restricted for the visit with operators citing security concerns.