Would Prefer to Live in My Own Country, Says NSA Whistleblower Edward Snowden 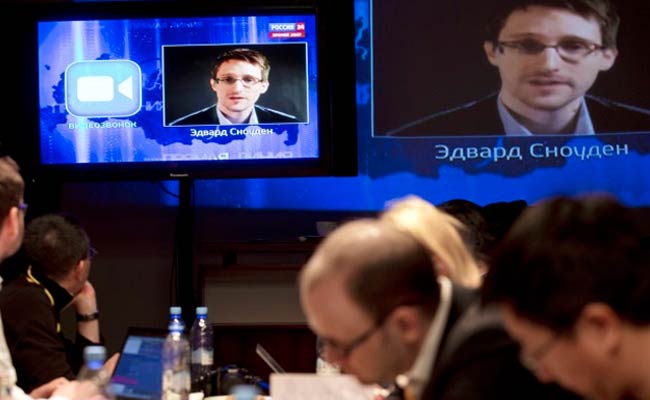 Oslo: Former US intelligence contractor Edward Snowden on Saturday criticised Russia - the country that has granted him asylum - calling its crackdown on human rights and online freedom "fundamentally wrong" and said he would prefer not to live in exile.

Snowden said Moscow's restrictions on the web were "a mistake in policy" and "fundamentally wrong" as he accepted a Norwegian freedom of expression prize by videophone from Russia.

"It's wrong in Russia, and it would be wrong anywhere," said Snowden, 32, who sought asylum in Russia two years ago after Washington filed a warrant for his arrest for having leaked documents that revealed the vast scale of US surveillance programmes.

Pushed on Moscow's deteriorating human rights record, the whistleblower said the situation is "disappointing, it's frustrating" and described restrictions on the Internet as part of a wider problem in Russia.

"I've been quite critical of (it) in the past and I'll continue to be in the future, because this drive that we see in the Russian government to control more and more the Internet, to control more and more what people are seeing, even parts of personal lives, deciding what is the appropriate or inappropriate way for people to express their love for one another...(is) fundamentally wrong," he said.

Snowden said he had "never intended to go to Russia, that was never my plan" and that he had been transiting the country en route for Latin America when US officials cancelled his passport.

"I applied for asylum in 21 countries," he told the audience at the ceremony for the Norwegian Academy of Literature and Freedom of Expression's Bjornson Prize. "They were all silent. Russia was actually one of the last countries in that sequence that I applied for."

The computer expert had left his job with a contractor for the US National Security Agency (NSA) in Hawaii in May 2013 in order to leak his trove of classified information to the British newspaper The Guardian from Hong Kong.

He recalled that the idea of leaving that city for Russia had been suggested by WikiLeaks founder Julian Assange - who himself had to seek asylum in Ecuador's embassy in London to avoid extradition to Sweden over sexual assault allegations.

"I think his (Assange's) intention was good. He was focused primarily on my safety as a publisher, and having a source, he was interested in the source protection angle," said Snowden.

The technical expert also criticised many "developed countries" for ignoring the public's concern about intelligence monitoring by imposing more restrictive laws, which he said turn out to be useless.

"They say: well these things are necessary to keep us safe, " he said, and cited for instance the deadly attack in January on a French satirical magazine.

"In the Charlie Hebdo attacks for example, the intelligence services say: 'Oh yes, we knew who these people were'. But it didn't stop the attack."

Despite his extraordinary situation, Snowden described his life as "normal", while adding: "I mean, I would prefer to live in my own country."

"But exile is exile," he said.

The White House in July rejected a petition to pardon Snowden, saying the fugitive should return to the United States and "be judged by a jury of his peers" for leaking US government secrets.

And despite his criticism of Russian Internet restrictions and laws encroaching on freedom of speech, Snowden said he feels he is allowed to express himself in Russia.

"I do. And I think it's primarily in the context of the fact that most activities happen online. I mean, when people ask me where I live, the most honest answer is on the Internet."
Comments
Edward SnowdenJulian AssangeRussiaUnited StatesUS National Security AgencyRussian governmentWhite HouseUS governmentUS intelligenceEdward Snowden filesSnowdenNSA spying allegationsNSA Surveillance