Jonathan the Seychelles Giant Tortoise is celebrating his 190th birthday -- more or less -- on St Helena in the remote South Atlantic, where the defeated French emperor died in exile in 1821. 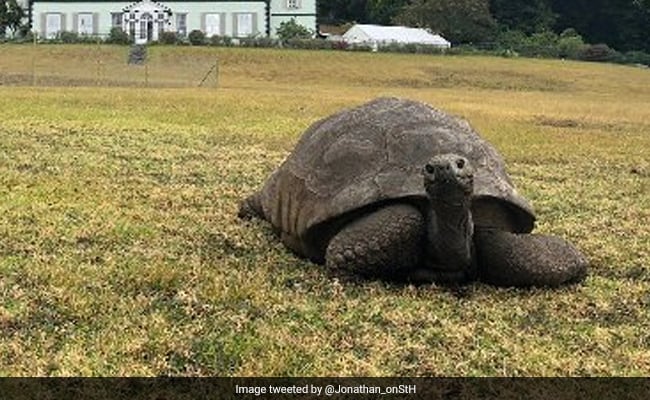 Jonathan, it is believed based on shell measurements, was hatched around 1832.

He was born not long after Napoleon died, and is now officially the planet's oldest known living land animal.

Jonathan the Seychelles Giant Tortoise is celebrating his 190th birthday -- more or less -- on St Helena in the remote South Atlantic, where the defeated French emperor died in exile in 1821.

Jonathan, it is believed based on shell measurements, was hatched around 1832, and he was brought to the UK overseas territory from the Seychelles 50 years later.

He lives out a comfortable retirement in Plantation House, the official residence of the St Helena governor, where his birthday is being marked with events all weekend including the issuance of a special stamp.

The celebration climaxes Sunday with a "birthday cake" made out of Jonathan's favourite foods.

He is particularly partial to carrots, lettuce, cucumber, apples and pears, according to his handlers interviewed by AFP in 2017.

Despite his advanced years, he is also partial to a female tortoise called Emma, who is merely in her 50s.

"He still enjoys the ladies and I have heard him quite regularly in the paddock with Emma and he grunts," then-governor Lisa Phillips said at the time.

"I have to keep an eye on him when he is doing that -- it was not in the job description when I became governor."

At the start of this year, Jonathan was given the Guinness World Records title as the world's oldest living land animal, and this month was also named as the oldest tortoise ever.

"When you think, if he was hatched in 1832 -- the Georgian era -- my goodness, the changes in the world," said Joe Hollins, a retired veterinarian who is Jonathan's main carer today.

"The world wars, the rise and fall of the British Empire, the many governors, kings and queens that have passed, it's quite extraordinary," he said.

"And he's just been here, enjoying himself."

While they hope for many more years, St Helena authorities have already made plans for the venerable chelonian's eventual demise: his shell will be preserved for posterity.