Flows of lava remained "contained" within the summit caldera of Mauna Loa, but the eruption could pose a threat to nearby residents should conditions change. 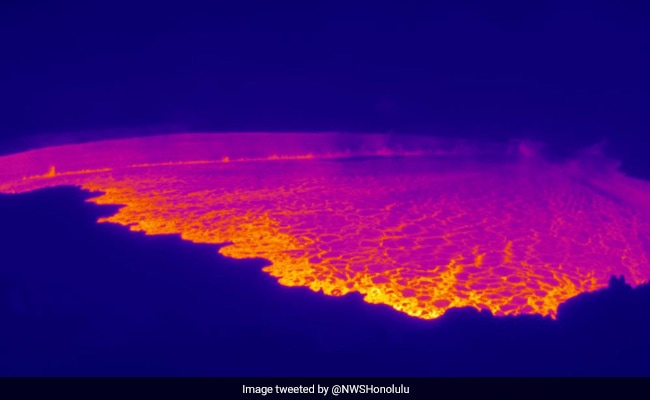 Hawaii authorities said no evacuation orders have been given.

Hawaii's Mauna Loa, the largest active volcano in the world, has erupted for the first time in nearly 40 years, US authorities said, as emergency crews went on alert early Monday.

Flows of lava remained "contained" within the summit caldera of Mauna Loa, but the eruption could pose a threat to nearby residents should conditions change, the United States Geological Survey (USGS) reported at 11:45 pm local time Sunday (9:45 GMT Monday) some 15 minutes after the eruption inside Hawaii Volcanoes National Park.

"At this time, lava flows are contained within the summit area and are not threatening downslope communities," the USGS said on its website, noting that residents of the area should review preparedness procedures.

While the eruption on the main island of the remote US state in the Pacific remains confined within the basin at the top of the volcano, called the caldera, "if the eruptive vents migrate outside its walls, lava flows may move rapidly downslope," according to the USGS.

Hours later on Monday morning the USGS volcano monitoring office tweeted: "Lava does seem to have flowed outside the caldera, but for now the eruptive vents remain confined to the caldera."

The agency said the Hawaiian Volcano Observatory was in consultation with emergency management personnel and its staff would conduct an aerial reconnaissance over the 13,674-foot (4,168-meter) volcano as soon as possible.

Hawaii authorities said no evacuation orders have been given, although the summit area and several roads in the region were closed.

The Hawaiian islands are home to six active volcanoes. Mauna Loa, the largest on Earth, has erupted 33 times since 1843, according to USGS.

The most recent eruption, in 1984, lasted 22 days and produced lava flows which reached to within about seven kilometers (four miles) of Hilo, a city which is home to about 44,000 people today.