Measured another way, the six-legged sprinter covers 108 times its own body length per second, a feat topped only by two other creatures, the Australian tiger beetle and the California coastal mite. 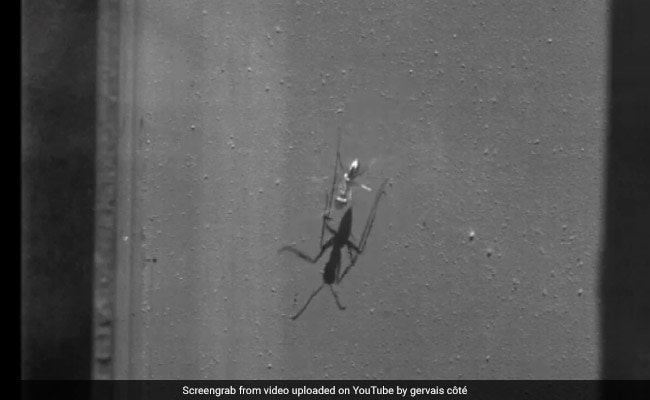 When the temperature dropped to a chilly 10 C the ant slowed down by more than a third.

It's official: The Saharan silver ant is the fastest of the world's 12,000 known ant species, clocking a blistering 855 millimetres -- nearly a metre -- per second, researchers said Thursday.

Measured another way, the six-legged sprinter covers 108 times its own body length per second, a feat topped only by two other creatures, the Australian tiger beetle and the California coastal mite.

To run 100 times his body length as quickly, the fastest man in the world, Usain Bolt, would need to sprint the 200-metre dash in less than a second.

Making the exploit even more remarkable, the Saharan silver hits top speed racing at midday across desert sands that reach 60 degrees Celsius (140 degrees Fahrenheit), the researchers reported in the Journal of Experimental Biology.

A quartet of researchers from the Universities of Ulm and Freiburg in Germany tracked down Cataglyphis bombycina in the Tunisian desert and set up a field lab as a race course.

"Once we had located a nest, it was simply a matter of connecting an aluminium channel to the entrance and placing a feeder at the end to lure the ants out," said lead author Sarah Pfeffer.

"They shuttled back-and-forth in the channel and we mounted our camera to film them from the top."

Pfeffer and her team also excavated a nest and transported it back to Germany, where they recorded C. bombycina's running prowess in cooler climes.

As expected, when the temperature dropped to a chilly 10 C the ant slowed down by more than a third.

It does this by swinging its tiny 5-mm long appendages at speeds of up to 1,300 mm per second.

The length of the ant's strides increased four-fold as the animal shifted into high gear, they found.

The scientists also discovered that -- at its fastest -- C. bombycina switches from running to a gallop, with all six feet off the ground at regular intervals.

Saharan silver ants are active outside their nests for only about 10 minutes a day, during which they search for heat-sticken lizards and other prey that they can pick apart and carry home.