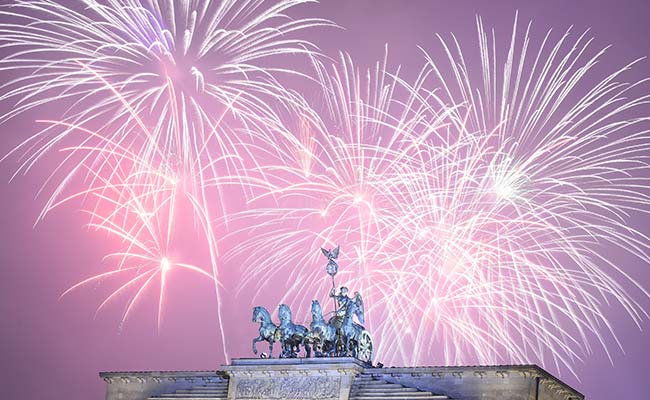 Fireworks explode behind the quadriga of Berlin's Brandenburg Gate to usher in the new year, on January 1, 2016. (AFP Photo)

Dubai, United Arab Emirates: The world greeted 2016 with Champagne and cheers, but tightened security put a damper on the party in Europe and a spectacular fire at a hotel in Dubai scared gathering revellers.

Fireworks were cancelled in Brussels and Paris as November's terror attacks cast a pall.

Yet at the stroke of midnight the skies still lit up with pyrotechnics in Sydney, traditionally the first to host a major New Year's bash, as crowds thronged to waterside vantage points.

Tens of thousands of revellers gathered on either side of Hong Kong's iconic Victoria Harbour, which was bathed in a dazzling fireworks display.

In Dubai, at least 16 people were injured when a huge fire ripped through a luxury 63-storey hotel, the Address Downtown, near the world's tallest tower where crowds were gathering to watch New Year's Eve celebrations.

The cause of the blaze was not immediately known but the building was safely evacuated and the emirate's government announced that the end-of-year celebrations, including a massive fireworks show at the Burj Khalifa tower, would go ahead as scheduled.

The chimes of midnight will move across Asia, the Middle East, Africa, Europe and finally the Americas.

In the heart of Europe, more than 100,000 police were to be deployed throughout France to guard celebrations that come six weeks after the jihadist attacks in Paris.

France "has not finished with terrorism yet", President Francois Hollande said in his New Year address, adding the threat of another attack "remains at its highest level".

Annual festivities and fireworks in Brussels were cancelled as the Belgian capital -- home to NATO and the European Union -- remains on high alert.

"It's better not to take any risks," Brussels mayor Yvan Mayeur said.

Belgian officials are battling terror on two fronts -- with police on Thursday holding five people over an alleged New Year attack plot in Brussels as well as arresting a tenth suspect over the Paris attacks.

Paris, still reeling from the November 13 slaughter of 130 people, has also cancelled its main fireworks display on the Champs Elysees avenue.

But authorities agreed France's biggest public gathering since the attacks can go ahead on the famous boulevard, with bolstered security.

Hong Kong, Beijing, Singapore and other Asian cities may rival Sydney's pyrotechnic splash, but Brunei will offer a sober evening after banning Christmas in a shift to hardline Islamic law.

Turkish police have detained two Islamic State suspects allegedly planning to stage attacks in the centre of the capital Ankara which is expected to be packed on New Year's Eve.

Meanwhile, in Moscow police will for the first time close off Red Square where tens of thousands of revellers traditionally gather.

"It's no secret that Moscow is one of the choice targets for terrorists," Moscow mayor Sergei Sobyanin said recently.

In Britain, Scotland Yard said there will be around 3,000 officers across central London in what is reported to be an unprecedented anti-terror security effort.

"Our plans are purely precautionary and not as a result of any specific intelligence," said Superintendent Jo Edwards, spokeswoman for Scotland Yard.

Fireworks were banned in towns and cities across Italy, in some cases because of a recent spike in air pollution but also because of fears that, in the current climate, sudden loud bangs could cause crowds to panic.

In Madrid, thousands of people will flock to Puerta del Sol square, however police will limit the number allowed in to just 25,000.

Berliners will do better with about a million expected at the Brandenburg Gate for a free mega-street party.

Party at the pyramids

Cairo meanwhile is trying desperately to attract tourists to bolster the economy.

The government is staging celebrations in front of the pyramids near the Egyptian capital, with ambassadors, artists and intellectuals all invited.

Egypt has been in turmoil since the 2011 uprising but was further hit by the October 31 crash of a Russian airliner over the Sinai killing 224 people.

In stark contrast, Sierra Leone's capital Freetown is hoping to reclaim its mantle as host of the best beach parties in Africa after Ebola scared people away.

The city of 1.2 million was deserted 12 months ago during the worst Ebola outbreak ever recorded.

"This New Year's Eve I am going to dance and party until the cock crows," said 35-year-old Franklyn Smith.

In the United States, authorities said they had arrested and charged a 25-year-old American Muslim convert over an alleged attempt to launch a New Year's Eve attack in upstate New York in the name of the Islamic State group.

In New York City, despite a pledge of tight security for Times Square, another million people are expected to turn out to see the ball descend.

Pakistan PM Warns Imran Khan, Says Nation Will Hold Him By Collar For His Sins