World leaders from 193 UN member states, including US President Donald Trump, listened to Antonio Guterres as he voiced concern over the paradoxes facing the globe today. 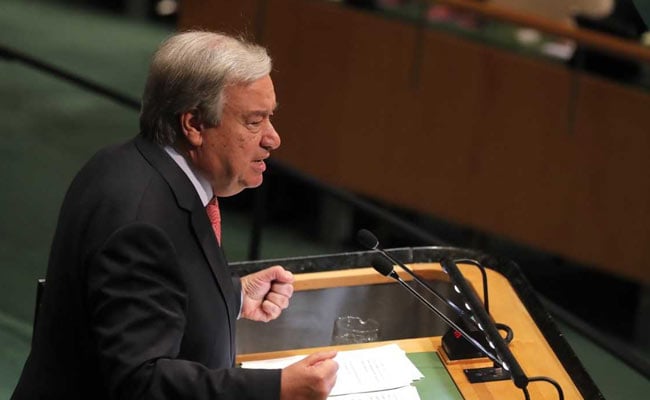 UN chief Antonio Guterres on Tuesday warned that the world is suffering from a bad case of "trust deficit disorder" where polarisation is on the rise and cooperation among nations is more difficult as he appealed to the global leaders for renewed commitment to a rules-based order.

Secretary-General Guterres, giving his second address as the UN chief to the world leaders from the iconic lectern in the General Assembly hall, painted a stark picture of the chaos in international order, saying cooperation among countries is less certain and more difficult, and divisions in the Security Council are stark.

World leaders from 193 UN member states, including US President Donald Trump, listened to Antonio Guterres as he voiced concern over the paradoxes facing the globe today.

Trump has been very critical of the United Nations and his administration has withdrawn from key UN institutions such as the Human Rights Council and the landmark UN pacts such as the Paris Climate Agreement.

"Our world is suffering from a bad case of 'trust deficit disorder'. People are feeling troubled and insecure. Trust is at a breaking point. Trust in national institutions. Trust among states. Trust in the rules-based global order.

"Within countries, people are losing faith in political establishments, polarisation is on the rise and populism is on the march," Guterres said in his address to the General Assembly at the opening of the high-level General Debate.

The UN chief said that while the world never had a true system of global governance, still over decades nations established solid foundations for international cooperation but today, the world order is increasingly chaotic.

"Power relations are less clear. Universal values are being eroded. Democratic principles are under siege. The rule of law is being undermined. Impunity is on the rise, as leaders and states push the boundaries at home and in the international arena.

"The world is more connected, yet societies are becoming more fragmented. Challenges are growing outward, while many people are turning inward. Multi-lateralism is under fire precisely when we need it most," Guterres said.

He stressed that while individual leaders have the duty to advance the well-being of their people, they also have the responsibility to promote and support a reformed, reinvigorated and strengthened multilateral system.

"We need renewed commitment to a rules-based order, with the United Nations at its centre and with the different institutions and treaties that bring the Charter to life," he said.

Guterres voiced this commitment to reform, and to making the United Nations more effective in responding to the needs and aspirations of "we the peoples".