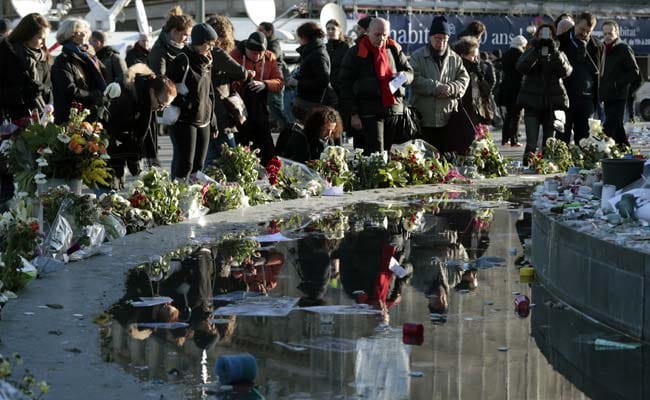 People gather at the foot of the centrepiece of Place de la Republique, a statue of Marianne, in east Paris on January 11, 2015 prior to a huge march. (AFP)

Paris: More than a million people and dozens of world leaders were expected to march through Paris on Sunday in a historic display of global defiance against extremism after jihadist attacks that left 17 dead.

In an unprecedented show of unity, the leaders of Israel and the Palestinian Authority will both be among the world leaders attending the rally to honour the victims of three days of bloodshed that included Jews and a Muslim police officer among the dead.

Under clear blue skies, emotions were already running high in the shell-shocked City of Light, as people from all walks of life began to rally under the banner of freedom of speech and liberty.

"I want to show that we're not scared of the extremists. I want to defend freedom of expression," said 70-year-old Jacqueline Saad-Rouana.

Another woman in her 50s who declined to be named said she was going to the march as it is "the way to show that I live in a country where everyone has their place."

The families of those who died in the three blood-soaked days that shook France to its core will rub shoulders with royalty and heads of state within an iron ring of security.

Defences were beefed up in a jittery Paris still reeling from the Islamist attacks on the Charlie Hebdo satirical magazine and a Jewish supermarket, with thousands of extra troops and police deployed to guard the march and snipers positioned along the route.

"I have no doubt that millions of citizens will come to express their love of liberty, their love of fraternity," French Prime Minister Manuel Valls told an emotional rally on Saturday near where a gunman killed four hostages at the supermarket.

In a foretaste of the demonstration, more than 700,000 people poured onto the streets of cities across France on Saturday, many carrying banners reading "Je suis Charlie" (I am Charlie), the tribute to Charlie Hebdo that has been the global rallying point in the wake of the slaughter.

Many brandished pens to symbolise freedom of expression after the magazine was targeted for its cartoons lampooning the Prophet Mohammed.

Along with Israel's Prime Minister Benjamin Netanyahu and Palestinian President Mahmud Abbas, the king and queen of Jordan will be present and a host of top European leaders, including German Chancellor Angela Merkel and British Prime Minister David Cameron.

US President Barack Obama will be represented by Attorney General Eric Holder, who will also take part in an emergency meeting of interior ministers to discuss the threats posed by Islamic extremism.

Speaking on a visit to India, US Secretary of State John Kerry said: "We stand together this morning with the people of France. We stand together not just in anger and outrage but in solidarity and commitment in confronting extremists."

President Francois Hollande, who will lead the tributes to the victims, has warned his shell-shocked country not to drop its guard in the face of possible new attacks.

The three-day rampage by three gunmen, who claimed to be members of the Al-Qaeda and Islamic State extremist groups, was followed by a chilling new threat from the Yemen-based Al-Qaeda in the Arabian Peninsula.

German newspaper Bild said the bloodshed in France could signal the start of a wave of attacks in Europe, citing communications by Islamic State leaders intercepted by US intelligence.

It said the US National Security Agency had intercepted communications in which leaders of the jihadist group announced the next wave of attacks, the mass circulation daily said in its Sunday edition, citing unnamed sources in the US intelligence services.

Early Sunday, a German newspaper in the northern port city of Hamburg that reprinted Mohammed cartoons from Charlie Hebdo was the target of an arson attack although no one was hurt.

France's three days of terror started on Wednesday when two brothers, Cherif and Said Kouachi, burst into the Charlie Hebdo offices and sprayed bullets into the editorial meeting, killing some of France's best-known cartoonists.

They then slaughtered a Muslim policeman in cold blood as he lay helpless on the ground before fleeing, sparking a manhunt that lasted more than 48 hours.

A day later, a third gunman, Amedy Coulibaly, shot dead a policewoman in a southern suburb of Paris.

The massive manhunt for the two brothers developed into a car chase Friday and a tense standoff as they took one person hostage in a printing firm northeast of Paris.

With the eyes of the world trained on the printing company in the small town of Dammartin-en-Goele and the siege of the Kouachi brothers, Coulibaly stormed into a Jewish supermarket in eastern Paris and took terrified shoppers hostage.

The twin hostage dramas came to a dramatic end as the brothers charged out of their building all guns blazing before being cut down by elite commandos.

Investigators are now trying to hunt down Coulibaly's partner, 26-year-old Hayat Boumeddiene, who was initially suspected of a role in the policewoman's killing.

After she was described as "armed and dangerous" and on the loose in Paris, a Turkish security source told AFP that Boumeddiene arrived in Turkey on January 2 and has since probably travelled on to Syria.

The attacks were France's bloodiest for more than half a century, with questions mounting about how the gunmen could have slipped through the net of intelligence services.

Coulibaly's mother and sisters on Saturday condemned his actions.

"We absolutely do not share these extreme ideas. We hope there will not be any confusion between these odious acts and the Muslim religion," they wrote in a statement.

Valls admitted there had been "clear failings" in intelligence.

Cherif Kouachi, 32, was a known jihadist who was convicted in 2008 for involvement in a network sending fighters to Iraq.

His brother Said, 34, was known to have travelled to Yemen in 2011, where he received weapons training from AQAP.

Promoted
Listen to the latest songs, only on JioSaavn.com
It also emerged that the brothers had been on a US terror watch list "for years".

Coulibaly, 32 -- who met Cherif Kouachi in prison -- was sentenced to five years in prison in 2013 for his role in a failed bid to break an Algerian Islamist, Smain Ait Ali Belkacem, out of jail.