Fifteen government leaders, including US President Donald Trump, took part in the virtual conference hosted by French President and the UN. 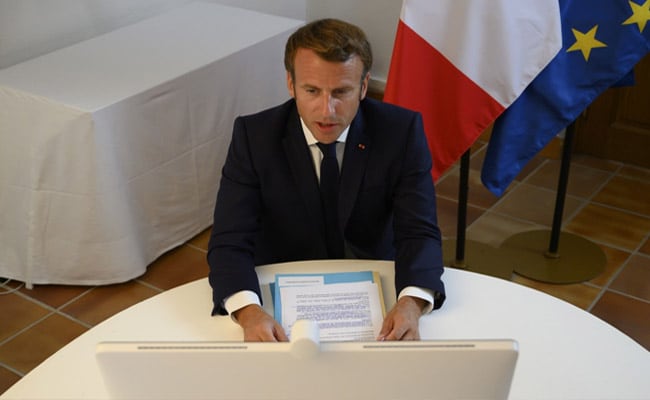 World leaders on Sunday pledged more than 250 million euros for disaster-struck Lebanon, conference host France said, with the emergency aid to be delivered "directly" to a population reeling from the deadly port blast in Beirut.

Fifteen government leaders including US President Donald Trump took part in the virtual conference hosted by French President Emmanuel Macron and the UN, pledging solidarity with the Lebanese people and promising to muster "major resources" in the coming days and weeks.

A joint statement issued after the meeting in which representatives of nearly 30 countries as well as the EU and Arab League participated, did not mention a global amount.

But Macron's office said the total figure of "emergency aid pledged or that can be mobilised quickly" amounts to 252.7 million euros ($298 millon), including 30 million euros from France.

Macron was the first world leader to visit the former French colony after Tuesday's devastating explosion of a huge stockpile of ammonium nitrate which killed more than 150 people, wounded some 6,000 and left an estimated 300,000 homeless.

The joint statement from the world leaders and their representatives underscored concerns about Lebanese government corruption.

"The participants agreed that their assistance should be timely, sufficient and consistent with the needs of the Lebanese people, well-coordinated under the leadership of the United Nations, and directly delivered to the Lebanese population, with utmost efficiency and transparency," it said.

USAID acting administrator John Barsa also said in a conference call Sunday that American help, some $15 million announced so far, "is absolutely not going to the government."

The donor nations urged Lebanon's authorities to "fully commit themselves to timely measures and reforms" in order to unlock longer-term support for the country's economic and financial recovery.

And they said assistance for "an impartial, credible and independent inquiry" into Tuesday's explosion "is immediately needed and available, upon request of Lebanon."

The UN said some $117 million will be needed for an emergency response over the next three months, for health services, emergency shelter, food distribution and programmes to prevent further spread of COVID-19, among other interventions.

Lebanese President Michel Aoun, who was also on Sunday's group call, thanked Macron for the initiative.

"Much is needed to rebuild what has been destroyed and to restore Beirut's lustre," the Lebanese presidency quoted him on Twitter as saying.

"The needs are many and we need to address them quickly, especially before the arrival of winter, which will accentuate the suffering of homeless citizens."

At least 21 people are still missing from the huge blast, and the Lebanese army said Sunday hopes of finding survivors are dwindling.

Lebanese people enraged by official negligence blamed for the explosion have taken to the streets in anti-government protests that have resulted in clashes with the army.

Macron said it was now up to the authorities of Lebanon "to act so that the country does not sink, and to respond to the aspirations that the Lebanese people are expressing right now, legitimately, in the streets of Beirut."

"We must all work together to ensure that neither violence nor chaos prevails," he added. "It is the future of Lebanon that is at stake."

Trump also called for calm, according to the White House, which said he agreed with other leaders on the group call to "work closely together in international response efforts."

"President Trump also urged the government of Lebanon to conduct a full and transparent investigation, in which the United States stands ready to assist," it said.

"The President called for calm in Lebanon and acknowledged the legitimate calls of peaceful protestors for transparency, reform, and accountability."

Apart from heads of state and government ministers, Sunday's conference was attended by UN aid coordinator Mark Lowcock, representatives of the World Bank, the Red Cross, the IMF, the European Investment Bank and the European Bank for Reconstruction and Development.

Israel, with whom Lebanon has no diplomatic relations, did not participate, though Macron said it had expressed a wish to contribute, nor did Iran which wields huge influence in Lebanon through the Shiite group Hezbollah.

Key Arab states in the Gulf, including Saudi Arabia, Qatar, Iraq and the UAE were represented, as were Britain, China, Jordan and Egypt.

Macron said Turkey, with which France's diplomatic ties have been icy over the Libyan conflict, and Russia had indicated their support for the initiative, though they did not take part in the conference.

According to the UN, at least 15 medical facilities, including three major hospitals, sustained structural damage in the blast, and extensive damage to more than 120 schools may interrupt learning for some 55,000 children.

Thousands of people are in need of food and the blast interrupted basic water and sanitation to many neighbourhoods.

France has been sending tonnes of medical and food aid, dozens of search and rescue personnel and forensic experts to aid the investigation, as well as reconstruction materials.

On top of cash aid pledged so far, Egypt and Qatar have promised field hospitals, Brazil said it would send 4,000 tonnes of rice, and Spain 10 tonnes of wheat.

"In these horrendous times, Lebanon is not alone," concluded the conference statement.