The Security Council will meet to discuss suspected attacks on two oil tankers in the strategic sea lane in the Gulf. 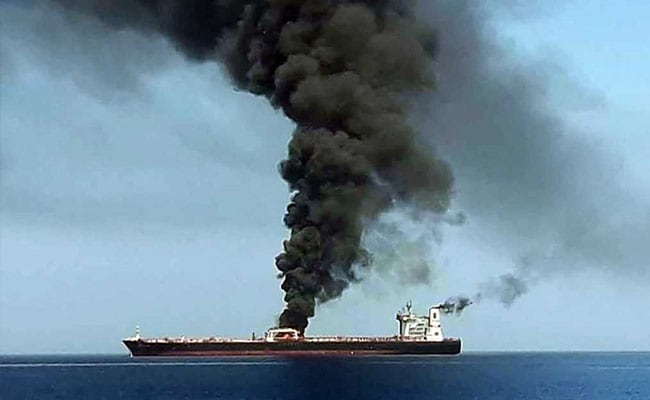 Two oil tankers near the strategic Strait of Hormuz were reportedly attacked today.

The world cannot afford a major confrontation in the Gulf, UN chief Antonio Guterres warned Thursday, as the Security Council prepared to meet to discuss suspected attacks on two oil tankers in the strategic sea lane.

The latest incident, the second in the Gulf of Oman in a month, came amid spiralling tensions between Tehran and Washington, which has pointed the finger at Iran over earlier tanker attacks in May.

"I strongly condemn any attack against civilian vessels," the UN secretary general told a Security Council meeting on UN cooperation with the Arab League.

"Facts must be established and responsibilities clarified," he said. "If there is something the world cannot afford, it is a major confrontation in the Gulf region."

At the request of the United States, the Security Council was to meet behind closed doors later Thursday to discuss the situation in the Gulf.

Yemen's Iran-aligned Huthi rebels said they had fired missiles on an airport in southwestern Saudi Arabia on Wednesday.

"Some parties in the region are trying to instigate fires in our region and we must be aware of that," Gheit told the council.

He urged the UN body to "act against those responsible to maintain security and stability in the region."

The Norwegian Maritime Authority said three explosions were Thursday reported on board the Norwegian-owned tanker Front Altair after it was "attacked" along with the Singapore-owned ship Kokuka Courageous.

Iran said its navy had rescued 44 crew members after the two vessels, which were carrying highly flammable material, caught fire.

On May 12, four oil tankers -- two Saudi, one Norwegian and one Emirati -- were damaged in still unexplained attacks in the Gulf of Oman off the United Arab Emirates.

The UAE last week said initial findings of its investigation pointed to the likelihood that a "state actor" was behind the bombings, but did not specifically blame Iran.

The preliminary findings were presented to the council which may consider a response.

These showed that it was "highly likely" that four Limpet mines, which are magnetically attached to a ship's hull, were used in the attacks, placed by trained divers who were deployed from fast boats.