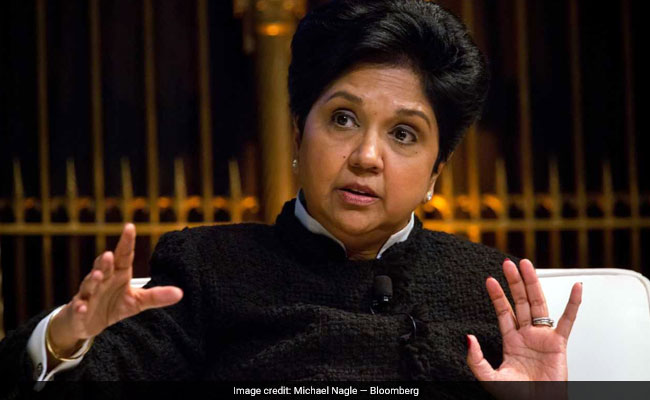 Indra Nooyi will leave the role in October and remain chairman until early 2019.

When asked in an interview with Freakonomics Radio earlier this year why there are so few female CEOs leading big corporations today, outgoing PepsiCo CEO Indra Nooyi pointed largely to work-life balance and a leaky pipeline as big culprits.

"I think the issue is that we get a lot of women in at the entry-level positions," said Nooyi, who was born in Chennai, India. "As you get to middle management, women rise to those positions, and then that's the childbearing years. And when they have children, it's difficult to balance having children, your career, your marriage, and be a high potential out-performer who's going to grow in the company, in an organization that is a pyramid. It starts to thin out as you move up. We have to solve for that."

Nooyi knows something about the topic -- her departure from Pepsi's corner office in October, announced this week will leave just 24 women running America's 500 largest publicly traded companies. (Kathy Warden will add one more when she takes over as CEO of Northrop Grumman in January.) But Nooyi's exit will also leave an even smaller number of women with a minority racial or ethnic background -- with only a small handful running major public corporations. In 2017, for instance, PG&E CEO Geisha Williams became the first Latina chief executive to run a Fortune 500 company; Advanced Micro Devices chief Lisa Su was born in Taiwan.

But a leaky pipeline and a lack of support for working mothers -- however important those issues are to resolve -- are also just part of the explanation for why so few women, and particularly minority women, reach corporate America's steepest pinnacle, researchers say. They also point to a lack of executive "sponsors" willing to advocate for women of color, the "emotional tax" or strain minority women face when being themselves in the workplace, and even the actions of white male colleagues that can thwart their success.

"If you boil it down to who people are expecting to see as a potential leader, there still is a very sticky prototype of a leader being tall, white and male," said Katherine Phillips, a professor at Columbia Business School who studies issues of diversity in leadership.

Because of that traditional model of a corporate leader -- and because many companies are still predominantly white and male -- women of color face a particular challenge as outsiders for both their gender and race or ethnicity in corporate settings, researchers say.

For instance, minority women must often exude an "executive presence" to help them meet norms and expectations, said Ripa Rashid, co-president of the research think tank Center for Talent Innovation.

While Nooyi managed to embrace her authenticity and roots, Rashid said, talking openly about coming to the United States as an immigrant or wearing a traditional Indian sari for special occasions, something that's not always easy for minority women to do.

Catalyst described the "emotional tax" that many minorities feel at work in a report earlier this year -- the sense they have to be "on guard" against potential bias from co-workers. Researchers doing a longitudinal study of African American women who'd gotten a Harvard MBA at the school over four decades found a similar sense of exhaustion when they interviewed some of the women, who felt "being themselves" at work often took more effort than it did for their white male peers.

This can be particularly challenging for minority female leaders, Phillips said. Her research has shown that even as leaders are expected to share more about themselves to seem "authentic," minorities often skip social events or disclose less about themselves out of fear they might reinforce stereotypes, rather than help break them. She uses talking about a weekend alumni event with a black sorority as an example.

"There's a fear that will be seen as more distancing than helping to bring them closer to you," making them seem more different, she said.

Women of color also do not receive the same high-level support from other executive backers as their white counterparts, according to CTI's Rashid. That type of "sponsorship" requires mentors who will actively go to bat on someone's behalf -- putting their own reputation on the line and advocating for them behind closed doors -- and is considered essential for advancement at the highest corporate echelons. But because sponsorships often fall along "lines of affinity, familiarity and comfort," said Rashid, they often bypass women of color.

Other research has shown that white men may even strike back after a minority or woman takes on a leadership role, if indirectly. University of Michigan business professor Jim Westphal found in a study of survey data involving 1,000 executives that white male leaders tended to feel less of an identification with their employers following the appointment of a female or minority CEO. That reduced their willingness to help other colleagues -- particularly those with minority status -- which could have an indirect effect on performance during the new CEO's tenure.

The explanation? Westphal doesn't sugar-coat it: "I think it is part of a biased reaction to a minority assuming a very high status position in the organization."

Such explanations are, of course, only part of the complex reasons so few minority women lead major public companies -- a host of other issues, from career decisions to ingrained stereotypes, organizational culture and family support play a role. Ilene Lang, Catalyst's interim CEO, says that even performance management systems that are supposed to be meritocratic can encourage bias, rewarding those who, say, "aggressively drive results" -- a behavior traditionally associated with male leaders that has the potential to hurt women if they are seen as acting outside of expected gender norms.

"People talk about this idea when you're choosing who the leadership team will be, of 'who would I want to be in a foxhole with?' " Lang says. The advancement and promotion of women -- and particularly minority women -- "is about a lot of other factors, many of which are very, very social."