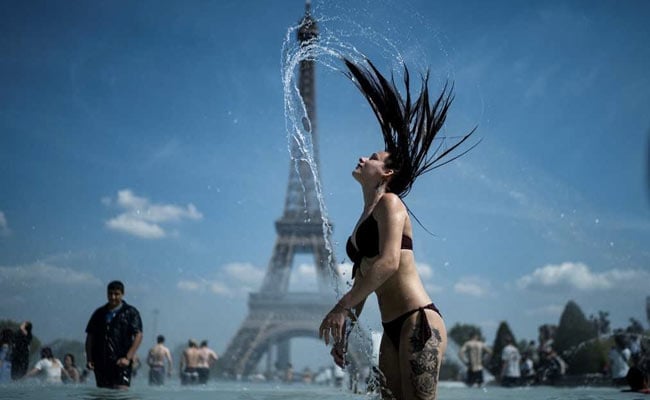 An early summer heat wave across Europe is breaking monthly - and in some cities - all-time records, as the continent oven-bakes under dangerous temperatures soaring above 100 Fahrenheit, driven by hot winds from the Sahara.

On the television news, the continent's weather reporters were standing in front of maps with swirling blobs of hot pink and blood red, illustrations of extreme heat.

Scientists in Europe are generally blaming human-induced climate change for such extreme weather events, while noting that no one warm spell can be blamed solely on the rise of greenhouse gases.

Photos of the jaguars swimming in the pool of the Zoo de Bordeaux-Pessac in southwestern France were trending. At the Mulhouse Zoo in northeastern France, the keepers were feeding the lemurs frozen raisin sorbet.

It's so hot in the Saxony region of Germany that officials are lowering the wide-open speed limits on the Autobahn as the roadways began to melt.

Blame the "Saharan Bubble" or the "Spanish Plume," its hot breath of Africa jetting into Europe, steered by a stagnant high-pressure zone responsible for the big Greenland melt event that has been breaking records for longevity. Scientists say extremes may be becoming more common in a warming world.

In Prague's city center, visitors and locals clustered around a sprinkler truck to cool down.

Final exams for students in France were delayed a week due to the heat wave, while French President Emmanuel Macron promised, "the whole government is mobilized."

In 2003, caught unprepared by a brutal heat wave, an estimated 20,000 people died in Europe, most of them in France.

In Austria, the health ministry launched a 24/7 phone hotline for citizens interested in "the most important rules of conduct" to deal with the heat. The ministry urged Austrians to dilute fruit juices with water.

Meaning: In a warming world, the prompt and punctual Austrians might take a siesta.

"We should reconsider our way of life and question if it is still adequate, given today's climate," Schorghofer said.

Newspapers in Germany published guides on whether the heat meant that employees could simply skip work (Answer: No.) and if wearing shorts at work was acceptable amid the heat wave (Answer: It depends.)

In Switzerland, the heat wave also coincided with the first weeks of basic training for the country's new military conscripts. To prevent the recruits from overheating, Swiss officials require them to regularly fill in forms to document their hourly water consumption, an official told Swiss media.

In France, several elderly swimmers died, apparently of "thermal shock," after entering the cool seawater after broiling on land.

In Germany, heated rows broke out over how much nudity to tolerate in the midst of the heat wave, which reached a record high of 101.3 Fahrenheit (38.6 Celsius) on Wednesday.

After a group of women took off their bikini tops in Munich last weekend to bathe along the banks of the city's Isar River, five security guards ordered them to put their tops back on, citing local public nudity prohibitions. In response, about two dozen women also took their tops off "out of solidarity," according to the German daily Suddeutsche Zeitung. The security guards proceeded to call the police, who insisted the women cover their breasts.

The Greens party brought the case to the city council on Tuesday and initiated a discussion about what "nude" entails, whether topless bathing should be counted as such, and how much nudity Munich can bear.

"For me, it's incomprehensible if men can lie in the sun topless but not women," said the Greens' Dominik Krause, among the initiators of the council debate.

German police in the eastern state of Brandenburg, which neighbors Berlin, looked on nudity more kindly when they posted two pictures of a man wearing nothing but a helmet while riding his motor scooter.

On Twitter the authorities asked for help finding captions. "Because we're speechless," the police wrote in the tweet, adding a sweating emoji and "for a bit of inspiration, a quote from the man: 'Is it hot or what?' "

Germany recorded its hottest ever June temperature on Wednesday - 101.5F (38.6C) - breaking a 72-year record. This upcoming Sunday, temperatures are projected to reach up to 102.2F (39C).

Spain was getting some of the worst of it.

More than 500 firefighters were deployed to fight a wildfire - likely caused by chicken dung spontaneously combusting - in the Tarragona province of Catalonia.

Temperatures in some Spanish regions are expected to rise above 109F (43C) on Friday.

Spain has long experience with heat waves caused by hot African air sweeping over the Iberian peninsula. But the Spanish National Weather Agency reported they are getting more frequent and lasting longer.

This year is making headlines as temperatures will hit new highs, and there will be little relief overnight. Spanish authorities have issued yellow and orange alerts in 25 provinces, with temperatures forecast to reach 104F in half of Spain - and as high as 111F in Zaragoza, Girona and Logroño.

More than a dozen cities, including Madrid, will likely set records in the next three days.

Authorities warned Spaniards and tourists to stay inside during the hottest hours and drink water.