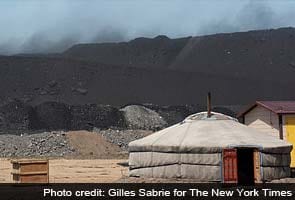 But another problem stood out. India relies on coal for 55 per cent of its electrical power and struggles to keep enough on hand.

Coal remains a critical component of the world's energy supply, despite its bad image. In China, demand for coal in 2010 resulted in a traffic jam 120 kilometers, or 75 miles, long caused by more than 10,000 trucks carrying supplies from Inner Mongolia. India is increasing coal imports.

So is Europe, as it takes advantage of lower coal prices in the United States. Higher-priced natural gas on the Continent is creating demand for more coal imports from the U.S., where coal is taking a drubbing from less costly natural gas.

Dirty, fickle and dangerous, coal may seem an odd contender in a world where promising renewable energy sources like solar, wind and hydroelectric power are attracting attention. Anathema to environmentalists because it creates so much pollution, coal still has the undeniable advantages of being widely available and easy to ship and burn.

The biggest attraction, however, is low cost. By many estimates, including that of Li Junfeng, longtime director-general of the National Development and Reform Commission of China, burning coal still costs about one-third as much as using renewable energy like wind or solar.

Coal is not subject to the vagaries of windless or sunless days and can easily meet base-load demands of electricity consumers without interruption. So can nuclear power, but the nuclear industry is still reeling from the March 2011 disaster at the Fukushima Daiichi power plant in Japan. Countries like Germany have turned away from nuclear reactors.

Global demand for coal is expected to grow from 7.9 billion tons this year to 8.9 billion tons by 2016, with the bulk of new demand - about 700 million tons - coming from China, according to a Peabody Energy study. China is expected to add 240 gigawatts, the equivalent of adding about 160 new coal-fired plants to the 620 operating now, within four years. During that period, India will add another 70 gigawatts, via more than 46 plants.

"If you poke your head outside of the U.S., coal-fired plants are being built left and right," said William Burns, an energy analyst with Johnson Rice in New Orleans. "Coal is still the cheapest fuel source."

Besides strong demand for thermal coal, which is burned in power plants, use of metallurgical coal or coking coal, used in blast furnaces, is also expected to more than double in China, to about 1.7 billion metric tons by 2016, as the country's steel mills churn out more steel for automobiles, skyscrapers, and export goods, the Peabody study says.

Coking coal will be increasingly in demand in other steel centers like Brazil and India, pushing coal companies to scrounge for new reserves in places like Botswana, Mongolia and Mozambique.

In all, coal use is expected to increase 50 per cent by 2035, said Milton Catelin, executive director of the London-based World Coal Association.

"Last year, coal represented 30 per cent of world energy and that's the highest share it has had since 1969," he said.

Within a year or two, coal will surpass oil as the planet's primary fuel, Catelin predicted.

For now, coal seems to be sidestepping a major potential impediment to its use. International accords restricting greenhouse gas emissions to prevent climate change so far have been ineffective.

China plans to put carbon-emission reducing equipment on new plants. But China and other big coal producers still have a long way to go in matters like mine safety. On average, about 2,500 Chinese coal miners die in accidents every year.

On Aug. 29, for instance, a blast at the Xiaojiawan mine in Sichuan province killed more than 40 miners. Officials blamed lax safety and overcrowding in the shafts.

Industry officials insist that as large Chinese coal companies like the Shenhua Group buy out smaller mines and new technologies develop that can detect dangerous methane gas and automatically shut down mines, safety will improve.

Nowhere are the controversies surrounding coal more pronounced than in the United States. Coal became an important issue in the presidential campaign, with the Republican nominee, Mitt Romney, accusing President Barack Obama of being anti-coal.

The American coal industry says Obama is waging a "war on coal" in response to his proposed regulation of air pollution and surface mining in mountain areas.

There has been a downturn in United States coal production this year, but that has been more the result of market economics than politics. A flood of natural gas from new sources is displacing high-cost coal in some areas.

Industry analysts expect the lull to be short-lived. They are looking for new sources of coal, notably coking coal. Shenhua Energy of China and Peabody Energy, plus a mix of Japanese, Russian and South Korean companies, are the lead bidders to develop the Tavan Tolgoi deposit in Mongolia.

Big export plans are under way in Colombia and South Africa. The Abhijeet Group of India has a new $7 billion contract for steam coal from Kentucky and West Virginia.

For now, coal seems to be sidestepping a serious potential impediment to its use: international accords restricting greenhouse gas emissions. So far, such agreements to prevent climate change have been ineffective.

China plans to put carbon emission reducing equipment on new plants. But China and other big coal producers still have a long way to go in matters like mine safety. On average, about 2,500 Chinese coal miners die in accidents every year.

On Aug. 29, for instance, a blast at the Xiaojiawan mine in Sichuan province killed more than 40 miners. Officials blamed lax safety and overcrowding in the shafts.

Industry officials insist that safety will improve as large Chinese coal companies like the Shenhua Group buy out smaller mines, and new technologies develop that can detect dangerous methane gas and automatically shut down mines.

Expansion plans face challenges. In Mongolia, the deposits are in remote areas requiring new roads and rail lines in extreme climate conditions. While South Africa has one of the world's largest export facilities, it is prone to labor unrest.

Australia is the world's largest coal exporter, but new regulations could increase its prices, said Jimmy Brock, chief operating officer for Consol Energy, which is based in Pittsburgh.

Australian regulators worry that the Great Barrier Reef might be damaged as ships pass by. Its ports are also subject to damage from storms and floods, affecting the shipping of coking coal and prices worldwide. In 2011, for example, ports in Queensland were closed because of Cyclone Yasi.

American coal companies badly want to export coal from the country's most productive mines in the Powder River Basin in Wyoming and Montana, but there is no way to send the coal out.

"We have no export capacity in the West," said Philip J. Cavatoni, chief strategy officer of Alpha Natural Resources, based in Virginia.

"The trains are noisy and will let off a lot of coal dust," said Eric de Place, senior researcher with the Sightline Institute, a public policy research group headquartered in Seattle.

Promoted
Listen to the latest songs, only on JioSaavn.com
Still, in the longer term coal's future depends on China and India, and its prospects look bright - mainly because it is cheaper than its competitors.