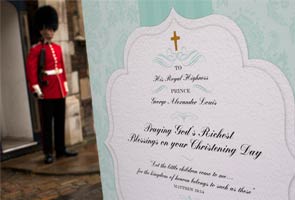 London: Britain's Prince William and his wife Catherine named the godparents for their baby son Prince George on Wednesday, as they gathered close friends and family for a low-key christening far removed from the global hype surrounding his birth.

The couple broke with tradition by only naming one royal, William's cousin and champion horse-rider Zara Philips, in the list of seven godparents, with the others being childhood, university and work friends.

Queen Elizabeth II and the couple's parents and siblings including William's younger brother Prince Harry were among the total of 22 guests invited to the Chapel Royal at St James's Palace in London, along with seven godparents.

Archbishop of Canterbury Justin Welby, the spiritual head of the world's Anglicans, will perform the baptism, welcoming the three-month-old into the Church of England he is one day destined to lead as King George VII.

The couple -- known to want a relatively normal upbringing for the young prince despite the world's interest -- also eschewed tradition by choosing the Chapel Royal rather than Buckingham Palace for the event.

The godparents include Zara Phillips, the daughter of William's aunt Princess Anne and husband of rugby player Mike Tindall, and William's childhood friends William van Cutsem and Earl Hugh Grosvenor; Julia Samuel, who was close to William's his mother Diana; and Emilia Jardine-Paterson, who went to the private Marlborough College with Kate.

Rounding out the list are Oliver Baker, a friend from St Andrew's University in Scotland, where the royal couple met, and William's long-time aide Jamie Lowther-Pinkerton, a former soldier in the elite SAS army unit. Despite speculation Prince Harry and Kate's sister Pippa Middleton were not named as godparents.

A handful of royal fans camped overnight outside the palace hoping for a glimpse of the queen and her three direct heirs -- Prince Charles, his son Prince William and baby George, who is third in line to the throne.

"This is a very special moment. We will see three kings in the making," said John Loughrey, a 58-year-old fan wearing a raincoat bearing the pattern of the Union Jack flag.

He slept out overnight in the rain, but told AFP it did not bother him, adding: "This is a unique, historic moment."

In the House of Commons, Prime Minister David Cameron urged lawmakers to "join me in celebrating" the event.
Holy water from the River Jordan

The christening will be held in private, a sharp contrast to the Duke and Duchess of Cambridge's lavish 2011 wedding, which was broadcast live on televisions across the world.

It is a sign of how closely they guard the privacy of the prince, who has not been seen in public since leaving hospital in the glare of hundreds of cameras after his birth on July 22.

An official photograph by celebrity snapper Jason Bell will be released to the public on Thursday.

The queen, 87, will attend with her 92-year-old husband Prince Philip, Charles and his wife Camilla and Prince Harry.

During the ceremony, Prince George will wear a lace gown and have holy water from the River Jordan poured on his head in what the Archbishop of Canterbury said was a "hugely important moment".

The religious service will be followed by a tea at Charles's official London residence, Clarence House, where guests will be served a portion of William and Kate's wedding cake.

It is traditional for Christian couples in Britain to save a tier of the cake -- normally fruit encased in icing to preserve it -- for their first child's christening.

The official photos taken at Clarence House are expected to gain iconic status, the first time four generations of monarchs have been pictured together since 1894, at the christening of the future king Edward VIII.

The only other photo of Prince George released to the public so far is a shot with William, Kate and the couple's dog Lupo which Michael Middleton took in his family's back garden.

Promoted
Listen to the latest songs, only on JioSaavn.com
Patrick Jephson, Diana's former private secretary, said the christening would send a strong message of the royal family's durability.

"It shows the continuing survival of the dynasty. It reinforces the public perception that the British royal family is going to be around for a long time to come," he told AFP.