Will Move To Withdraw From Trans-Pacific Partnership 'On Day One': Donald Trump 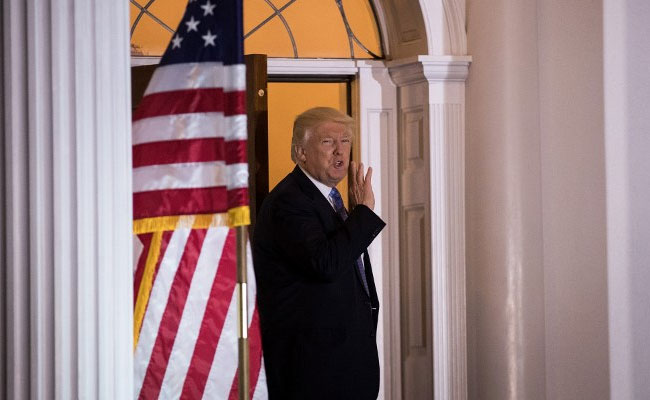 Washington, United States: Donald Trump said Monday he would move to pull out of the Trans-Pacific Partnership (TPP) trade deal the day he takes office, in line with a central campaign pledge.

"I've asked my transition team to develop a list of executive actions we can take on day one to restore our laws and bring back our jobs," the US president-elect said in a video message outlining priorities for his first 100 days.

"On trade, I am going to issue our notification of intent to withdraw from the Trans-Pacific Partnership, a potential disaster for our country," he said.

"Instead, we will negotiate fair, bilateral trade deals that bring jobs and industry back onto American shores."

The Republican billionaire's victorious campaign successfully tapped the anger of working-class American voters who feel left behind by years of globalization, vowing to protect American jobs against cheap labor in countries like China and Mexico.

Trade deals such as TPP and the 1993 North American Free Trade Agreement featured heavily in the brutal White House race and many see Trump's victory as a repudiation of ever-deeper commercial ties.

The president-elect had vowed both to scuttle the TPP -- President Barack Obama's signature trade initiative -- and renegotiate NAFTA.

"My agenda will be based on a simple core principle: putting America first," he said.

Trump's pledge on the TPP was one of six policy points that he vowed to act on as soon as he takes office on January 20:

"On energy, I will cancel job-killing restrictions on the production of American energy -- including shale energy and clean coal -- creating many millions of high-paying jobs. That's what we want, that's what we've been waiting for.

"On regulation, I will formulate a rule which says that for every one new regulation, two old regulations must be eliminated, it's so important.

"On national security, I will ask the Department of Defense and the Chairman of the Joint Chiefs of Staff to develop a comprehensive plan to protect America's vital infrastructure from cyber-attacks, and all other form of attacks."

"On immigration, I will direct the Department of Labor to investigate all abuses of visa programs that undercut the American worker."