Why Were Her Limbs So Floppy? 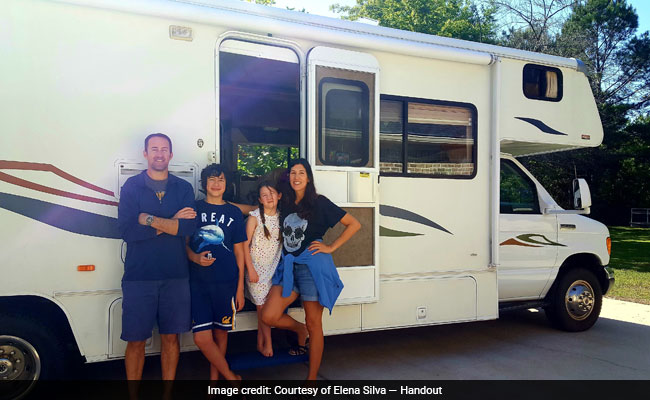 Gabriela "Gg" Woodward with parents and brother during the family's cross-country road trip in 2015.

Elena Silva gripped her cellphone, struggling to convey a sense of urgency to her husband, Brian Woodward, whose response was drowned out by the background din of a suburban Maryland swimming pool on a steamy July afternoon.

"You have to bring the kids here - right now," Silva remembers insisting. She believed that the couple's long-running quest for a diagnosis of their daughter Gabriela, known as Gg (pronounced "Gigi"), then 7, hinged on the little girl's presence.

Woodward had taken Gg and her older brother Elian to the pool while Silva, hoping to meet researchers and network with knowledgeable parents, was attending a 2014 meeting at the Clinical Center, the research hospital on the grounds of the National Institutes of Health, a few miles from the family's home. Once a year, specialized neurology researchers and families affected by a constellation of rare neuromuscular disorders get together, a confab that is both supportive and aimed at furthering research.

Silva, who had learned of the event only that morning, was mingling with participants when a parent-advocate asked, "Where's your daughter? Why isn't she here?"

When Silva replied that Gg was at the pool, the woman advised Silva to get the little girl to NIH - and fast. That way, one of the world-renowned researchers in attendance, preferably Carsten Bonnemann, chief of the neuromuscular and neurogenetic disorders of childhood section at the National Institute of Neurological Disorders and Stroke, could meet her. If Bonnemann took an interest in her case, Gg might be accepted into a study and could receive a diagnosis, something that had so far proved maddeningly elusive.

Forty minutes later, still wearing their damp bathing suits, Gg, her father and her older brother appeared at the meeting. Silva introduced her daughter to Bonnemann.

Nearly 18 months later, Gg did receive a diagnosis, an occurrence that would have been far less likely without her mother's serendipitous encounter.

"I am still completely blown away by this coincidence," Silva said. "It turned out to be just the place I needed to be."

Within minutes of Gg's birth in April 2007, the obstetrician noted that she seemed to have low muscle tone in her arms. A second doctor checked the newborn and told her parents she was "a little floppy" but that there was no cause for concern.

The couple noticed that Gg was far less active than Elian, three years older, had been. In her mother's words, she seemed "weak and floppy and small." Gg had difficulty holding her head up. When placed on her stomach, she couldn't push up using her arms, something most infants accomplish at around 2 months. Her legs seemed to dangle helplessly.

"She was like a noodle," recalled her mother, a policy director at New America, a Washington think tank.

When Gg was 6 months old, the pediatrician referred her to Maryland's early intervention program for children with developmental disabilities. A physical and occupational therapist made home visits and tested Gg; her gross motor development was clearly lagging.

The next few years were a blur of frequent appointments with specialists in Washington and Baltimore and numerous tests - some painful - as doctors considered, then ruled out, suspected causes of Gg's muscle weakness.

Among the possibilities: Prader-Willi syndrome, a rare genetic disorder that causes short stature, intellectual disability and an insatiable appetite; cerebral palsy, a neurological condition typically present at birth caused by damage to the brain; and various chromosomal abnormalities that ranged in severity.

"Everything kept coming back negative," Silva recalled, "which is wonderful and not wonderful. You just want to know."

In the meantime, it was clear that Gg's cognitive abilities were unaffected: She talked at a young age and was obviously bright. She continued physical and occupational therapy to try to strengthen her muscles. She crawled at age 2 and began walking by 3, much later than normal.

But her parents felt increasingly whipsawed by contradictory advice. One prominent specialist in Baltimore seemed unconcerned about Gg's delayed development and diagnosed "benign congenital hypotonia" - essentially, low muscle tone present at birth - and assured them she would outgrow it.

His advice was diametrically opposite that of specialists in Washington who suspected Gg had a rare but as yet unidentified genetic disorder. Some urged more invasive testing - a torturous experience for Gg and Silva, who said that the little girl was terrified of needles.

"Everyone at this point is suggesting everything," Silva recalled. "And I was trying to be as involved as I could, trying to figure it out."

Many nights, she said, she would awaken at 3 a.m. unable to sleep, and spend the next three hours on her computer "trying to put together the puzzle." She scoured the internet looking for other children whose disorder matched Gg's, but found none. It was a lonely and largely fruitless search.

Meanwhile, Gg started school and learned to parry the inevitable and sometimes hurtful questions of other children: Why are you so slow? Why can't you run or jump? What's wrong with you?

By 2013, doctors had largely decided that Gg probably had a form of myopathy, a disease affecting muscle tissue that has a wide variety of causes. Some myopathies are caused by genetic mutations; others result from infections or for unknown reasons. Silva and Woodward had no idea what disorder Gg had, what caused it or how to treat it.

One increasingly likely possibility, based on the extensive testing Gg had undergone, was a congenital form of muscular dystrophy, or CMD. Congenital muscular dystrophy is present at birth or before age 2; the most pronounced symptom is floppiness or a lack of muscle tone. Some forms are progressive and may be accompanied by cognitive disabilities.

In July 2014 as a result of her internet research, Silva stumbled upon the annual "Cure CMD" meeting, which was being held at NIH.

"Elena just showed up basically while we were milling around with the families," Bonnemann recalled. About 40 families from around the country were meeting with researchers as part of a study of congenital muscular dystrophy.

After hearing Silva's description of her daughter's case and meeting Gg, Bonnemann that day performed an exam that included an ultrasound of her leg muscles. It revealed clear structural abnormalities.

"In her case, there was only gross motor delay," said Bonnemann, who found Gg engaging and "a very smart little kid."

Silva was elated at what happened next.

Gg was enrolled in a study of undiagnosed neuromuscular diseases that Bonnemann was overseeing. Her parents hoped researchers would be able to make a definitive diagnosis.

A muscle biopsy in February 2015 confirmed the presence of a muscle disease. The next step was whole exome sequencing of Gg and her parents - genetic screening that is among the most extensive available. The test uses a blood sample to perform a sophisticated analysis.

In the summer of 2015, the family took off on a long-planned year-long cross-country road trip in an RV. In November 2015, while the family was at Lake Tahoe, Silva's cellphone rang.

A geneticist at NIH delivered the long-awaited news: Gg had inherited two different genetic mutations, one from each parent, affecting one of the body's largest genes, known as titin, or TTN. Gg had titin myopathy, one of a group of rare disorders first identified in Finland. (Silva said that she and her husband are unaware of any Finnish ancestry and that no one in their families has muscular dystrophy.)

The TTN gene provides instructions for making a very large protein called titin, which is essential in muscle function - it allows muscles to stretch - and for proper cardiac function.

Titin myopathies can be dominant and result from a single gene or, as in Gg's case, recessive, occurring in someone who inherits two copies of an errant gene. A single gene means that a person is a carrier without obvious manifestations of the disease, as are Gg's parents and her brother, something they learned after they were screened.

Some titin mutations have also been linked to certain forms of cardiomyopathy, a common disease that affects the heart's ability to pump blood and can lead to heart failure.

Bonnemann, co-author of a 2014 study, said scientists don't yet understand "why some kids have heart disease and some don't." Gg shows no sign of cardiac involvement. "Hopefully this will be quite stable over the years," he said.

To Silva, the news was portentous - and a relief. "It was a pretty big moment," she recalled. "I hung up the phone and went into the front room and told Gg what it was and that it came from me and Daddy. I think she was sort of relieved it was both of us."

So was Silva. "There's always a certain amount of guilt," she said, knowing that she passed on a gene, albeit unknowingly, that caused her daughter's condition. "But there's twice as much relief that it came from both of us."

Because Gg's disease is so rare and recently identified, Bonnemann said, it is not known how common it is, although he noted a recent "explosion" in the identification of titin-related disorders. In the past three years or so, NIH has seen 20 newly identified titin myopathy patients. Silva said the titin myopathy Facebook group to which she belongs has only about a dozen members.

Silva said that although Gg continues to battle muscle weakness, she has "exceptionally good balance and coordination." And the disorder does not affect her in the water. "She's like a little seal," Silva noted.

But having a problem that is rare and limits her ability to do what comes naturally to other kids - move - can be isolating. "She's an emotionally sensitive [kid] with a lot of awareness of her condition, and that makes it difficult," her mother said. "She'll say, 'I wish my muscles worked better. I wish that I wasn't different.' "

Last month Gg, now 10, spent a week feeling less singular, at a camp for children with muscular dystrophy in Chestertown, Maryland. Gg, her mother said, had a blast and is looking forward to returning next summer.

While she was away, her mother attended the annual Cure CMD meeting that three years ago proved to be so pivotal.

Silva still marvels at the coincidence that led to her attendance. "We'd never know what was wrong if we weren't fortunate enough to live near NIH," she said.

(This story has not been edited by NDTV staff and is auto-generated from a syndicated feed.)
Comments
neuromuscular disordersneurogenetic disorders