A smiling Michelle Obama emerges from the darkness and wraps her arms around Kanye West, who opens his eyes 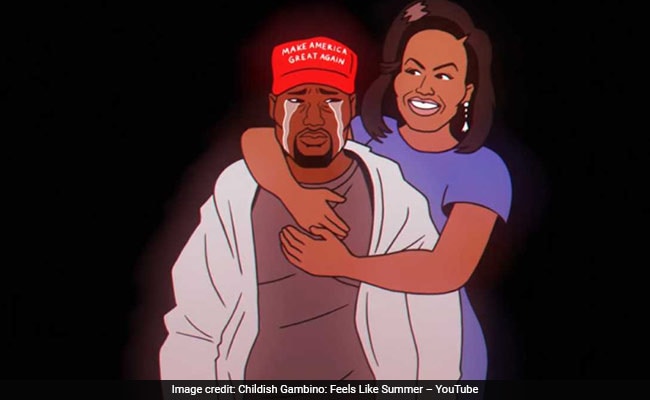 Donald Glover's Childish Gambino struck the country like an earthquake earlier this year when he released the metaphor-laden, deeply layered video for "This is America." Both the song and its video wrestled with issues such as systematic racism, financial inequality and the prevalence of gun violence.

Dropped in May, that video welcomed the warmer months. Over Labor Day weekend, the rapper dropped another new video to conclude this hot and humid season, fittingly for a song titled "Feels Like Summer."

The video - co-directed by Glover, Ivan Dixon and Greg Sharp, and illustrated by Justin Richburg - is nearly the diametrical opposite to "This is America." For one thing, it's animated. It also isn't as overtly political, even though the lyrics of "Feels Like Summer" reference climate change, water shortage and colony collapse disorder. Just consider the second verse:

Every day gets hotter than the one before

Running out of water, it's about to go down

Air that kill the bees that we depend upon

Birds were made for singing

Waking up to no sound

The video, though, doesn't spend much time on politics. Instead, it's filled with famous rappers just chilling as a character who appears to be Gambino strolls down a city street, listening to his headphones.

Everyone's engaged in classic summer activities. Birdman mans a grill, while Chance the Rapper eagerly awaits his meal. Nicki Minaj and Travis Scott, instead of feuding as they've been in real life, are playing with toy blocks. 21 Savage enjoys what appears to be a joint in his car. ASAP Rocky and Solange Knowles play a friendly round of tug-of-war with the Weeknd and some others. Drake chases after Future, who's riding a bicycle.

The vibe is serene and chill. It invites you to re-watch it again and again to catch all the hip-hop references animated throughout. The focus seems to be community as, for the most part, everyone is getting along.

The video ends with Gambino finally reaching a house, which he walks into. The lyrics annotation website Genius suggested this moment "symbolizes Gambino leaving the rap community" - but that's not the scene people are talking about.

Instead, they're focused on an image that precedes it, and only lasts a few seconds.

In the middle of the video, the screen changes for a moment, the neighborhood scene disappearing. Replacing it is a black screen. Slowly, an extremely depressed Kid Cudi appears, simply standing there.

He's then replaced with his mentor and collaborator, Kanye West, who also stands against a black background. He's wearing a bright red "Make America Great Again" hat - much like the autographed one he posted to Twitter during the epic rant in which he expressed affection for President Donald Trump - but he doesn't appear happy. Tears stream down his face like static waterfalls.

All he needs, or so it seems, is a hug from the former first lady.

A smiling Michelle Obama emerges from the darkness and wraps her arms around West, who opens his eyes. His tears quickly dry up. The darkness washes back over the two, who are replaced with Beyonc&#233; standing with her eyes closed and wearing a shirt reading "R.I.P. Fredo Santana," a reference to the rapper who died in January at 27.

The video then continues as before, with children spraying Meek Mill, Lil Wayne and Pusha T with water guns before moving on to J. Cole (who uses a hose to spray them back).

While many on social media have attempted parsing out the video's various references, particular attention has been paid to the West-Obama moment - and not all of the reactions were positive.

It is a fairly surprising thing to see, considering West's recent comments about slavery being a choice and his seemingly strong support of Trump. Many took issue with the scene, claiming it reinforces the corrosive stereotype of black women's primary function being to heal or fix black men.

"According to Childish Gambino, Kanye West needs a black woman to save him. Also related, water is wet," the Root tweeted.

"This messaging is both confusing and infuriating. Black women have our own issues yet we're supposed to fix everyone else's," tweeted another user. "Who is there to save us?"

Others, though, argued that the scene was meant to imply that West could use a motherly figure in his life.

West has long blamed himself for his mother's death, and it still appears to affect him. In April, as The Washington Post reported, West tweeted a screenshot of a "text-message conversation in which he said he plans to use a photo of Jan Adams - the surgeon who performed the operation on Donda West that led to her death - as the cover of his new album, which will potentially be titled 'Love Everyone.'" (He didn't end up using the photo, and his album was titled "ye.")

In fact, some have suggested it's actually Donda West, not Michelle Obama, depicted in the video - though that does not appear to be a popular opinion.

The only thing that's clear is Childish Gambino, who once released an album titled "Because the Internet," once again has the internet talking.

(Except for the headline, this story has not been edited by NDTV staff and is published from a syndicated feed.)
Comments
Michelle ObamaKanye West