General Motors remains mired in legal challenges from the labor union that represents over 1,000 former workers that the firm let go from the plant, effectively barring its exit. Flanked by green hills flecked with yellow and orange wildflowers, General Motors Co's 300-acre plant in the town of Talegaon in western India stands largely idle, as it has for most of the past year. Only a moldy layoff notice pinned outside the mothballed factory hints at the difficulties GM now faces in disentangling itself from the country.

Four years after ceasing sales in India and more than a year since its final car for export rolled off the production line, the carmaker remains mired in legal challenges from the labor union that represents more than 1,000 former workers that the company let go from the plant, effectively barring its exit.

GM's sale of the factory complex to China's Great Wall Motor Co is also in limbo, despite a deal signed in January 2020. India has curbed new Chinese investment since April of that year, and a number of deadly clashes along the two nations' disputed border in the weeks that followed have eroded relations further.

Even as foreign investment in India increases rapidly, GM's $1.1 billion in losses, followed by the political and legal issues keeping it from selling its business, is a stark warning to foreign investors. International companies have been trying to reach the growing middle class in this nation of 1.4 billion ever since its economic liberalization in the 1990s. But they've been stymied by high tariffs, strict labor rules, a challenging legal system, and other hurdles.

"India still is a difficult place to manufacture from," says Richard Rossow, a former deputy director at the US-India Business Council and now Wadhwani chair in US-India policy studies at the Center for Strategic and International Studies in Washington. "Most global manufacturers have found it hard to tap the market and go in a big, significant way."

Until August this year, a controversial law allowed the Centre to retrospectively levy capital gains tax on foreign businesses for the indirect transfer of their Indian assets. It took years of fighting in arbitration courts by businesses, including oil and gas explorer Cairn Energy Plc and Vodafone Group Plc, before Delhi eventually rescinded the rule.

Global automakers face a particular struggle to gain traction in the country. Consumers favor cheap, compact cars such as those made by Hyundai Motor India Ltd and Maruti Suzuki India Ltd, and the two companies control 60% of the market. Toyota Motor Corp has ruled out any expansion here, and motorcycle maker Harley-Davidson Inc gave up last year. 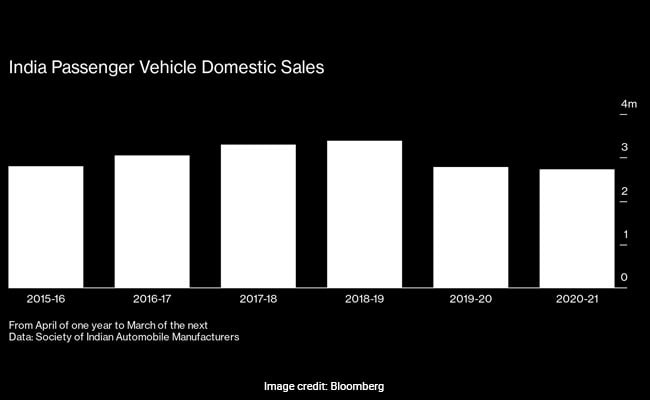 Ford Motor Co is also winding down its operations in the country. That decision will cost the company $2 billion in restructuring charges and may entangle it in lengthy legal fights with local dealerships, which stand to become liable for providing after-sales services once the manufacturer leaves. "We expect Ford to give some compensation to dealers," Vinkesh Gulati, president of the Federation of Automobile Dealers Associations, told Bloomberg TV in September.

A Ford India spokesman says the restructuring "follows a detailed examination of India business and potential options in the wake of changing economic and regulatory environments."

"Working with our dealers, we continue to maintain full customer operations for our existing customers," he says.

A further roadblock is a tax regime that imposes levies of as much as 28% on domestic sales of gasoline vehicles. And duties on imported vehicles range from 60% to 100%. Elon Musk said in 2019 that import duties would make Tesla Inc vehicles unaffordable in India.

International investors also have often stumbled while navigating the byzantine rules and regulations implemented by central government and 36 states and union territories, according to Rossow. Companies with more than 300 employees cannot fire anyone without government permission. Land acquisition at a price that won't trigger contested claims or require bribes may be a problem, and electricity from the grid is unreliable. All the while, businesses must be prepared to face regular shakedowns and outright corruption, he says.

Foreign direct investment in India surged 19% last year, but it still accounts for a smaller percentage of gross domestic product than in countries such as Singapore and Vietnam. A large portion went to businesses owned by Asia's richest man, Mukesh Ambani, as a handful of well-connected Indian conglomerates like his have increasingly become the gateways to doing business in the country.

At the national level, Prime Minister Narendra Modi's administration has made it easier for foreign investors to do business, according to Rossow. "A lot of the prime minister's personal engagement with executives is all trying to encourage that next big investment," he says. However, those who've already invested have received "a little bit less time and attention over the last couple of years."

In the 1990s, GM moved into the newly open Indian economy with great enthusiasm. Its factories pulled thousands of locals into well-respected blue-collar careers in a country that's long struggled to provide formal employment to the millions of Indians who join the labor market each year.

Securing a job with the US company more than a decade ago allowed Navnath Shete, a 34-year-old father of two, to marry above his station in status-conscious India. He was able to take on housing loans, enroll his children in private schools, and provide financial support to other relatives.

Now, like hundreds of others who used to work at the Talegaon plant, Mr Shete has been out of a job and deeply in debt since the union rejected GM's termination package.

"Everything fell apart," Mr Shete says. "When I lost my job, my wife didn't want to go back to the village and do farming. Her parents thought I had a good job."

GM said its offer was more than seven times the statutory requirement and provided workers at least three years' salary on average. But only a few hundred accepted the deal. In April the company laid off the holdouts without securing the usually required prior government permission by classifying the Covid-19 pandemic as a "natural calamity," which GM said allows such an independent action.

"The union was intentionally ignoring GM's business situation in India and was not negotiating in good faith to the detriment of the workforce," says George Svigos, a spokesman at GM International. "The company had paid employees their wages for half a year, despite no vehicles being produced at the site."

The union argues that the layoffs are illegal and has filed multiple court cases challenging them. In an August 25 letter seen by Bloomberg Businessweek and addressed to Great Wall Motor, the union's lawyer said GM's staff had been laid off as "a pressure tactic" and the Chinese company will be required to reinstate the workforce if the worker group wins in court.

"The company remains very confident of its legal position and has acted in accordance with law and the certified standing orders agreed between the union and management," Svigos says.

Few former GM employees expect to find similar jobs and pay: Manufacturing as a percentage of India's GDP has fallen from 15% in 2014, the year PM Modi came to power, to 12.9% in 2020, according to World Bank data. "Nobody in India without higher education gets a job after 26," says Sandeep Bhegade, president of the union at the GM plant. "We have 2.5 million rupees [$33,660] debt on an average. How will we live?" 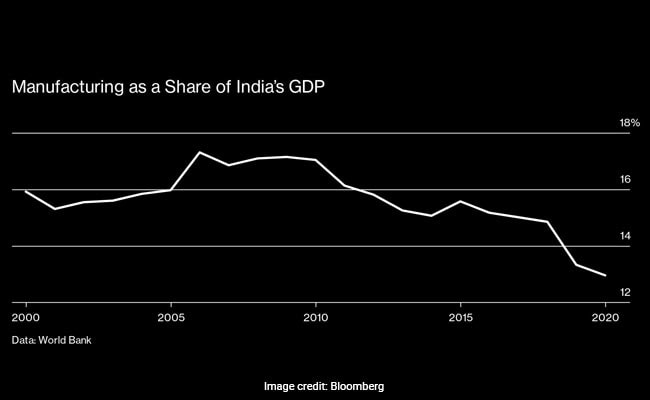 Great Wall remains interested in expanding on the subcontinent. "India is one of the markets that carry the most potential in the world. We will continue to invest in India," a company spokesperson says. "All projects are progressing steadily as planned."

Yet India's restrictions on Chinese investments are likely to remain in place, even if the boundary dispute eases. "There's zero trust," says Tanvi Madan, a senior fellow at the Brookings Institution in Washington. "This also has implications for the economic issues and some of these restrictions."

Many of GM's former workers still hope that the sale to Great Wall Motor will go through and that they will be hired. Analysts believe Delhi could relent over time, because automaking isn't seen as a key sector for the government. But GM has stated that transferring employees to Great Wall wasn't part of its original agreement. For now, GM's meetings with Indian and US government officials have yet to help break the impasse on the sale or on its labor issues, according to people familiar with the matter. And with India drawing record levels of funding and listings on its stock markets, plus PM Modi increasingly promoting economic self-reliance for the country, it's far from certain that his government will fret much over some existing foreign manufacturers' leaving the country.

"Maybe Ford and GM will start changing that calculus a little bit, and they'll get a little bit more concerned," says Rossow, referring to Indian officials who are watching the high-profile carmakers bail on the nation. "But even with these big exits, a lot of folks are coming." - With Ying Tian