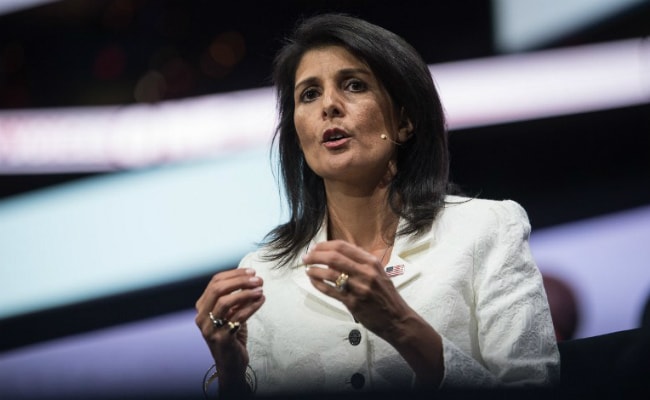 Nikki Haley drew criticism for playing down US goal of persuading Assad to leave power. (AFP)

Washington: The White House on Friday backed top aides' comments that the United States is not now focussed on making Syrian President Bashar al-Assad leave power, saying the US focus is on defeating ISIS terrorists.

Secretary of State Rex Tillerson and US ambassador to the United Nations Nikki Haley on Thursday drew criticism for playing down a long-standing US goal of persuading Assad to leave power to help end the six-year-long Syrian civil war.

Tillerson said Assad's future is up to the Syrian people to decide, while Haley said "our priority is no longer to sit there and focus on getting Assad out."

At his daily news briefing, White House spokesman Sean Spicer said that regarding Assad, "there is a political reality that we have to accept in terms of where we are right now."

Spicer blamed the inability of Trump's predecessor, Democrat Barack Obama, to persuade Assad to step down.

The Obama administration, in its later years, was focussed on reaching a deal with Russia that would eventually see Assad go, though it also shifted its focus to the fight against ISIS terrorists, who captured swathes of territory in Iraq and Syria in 2014.

"We had an opportunity and we need to focus now on defeating ISIS," Spicer said. "The United States has profound priorities in Syria and Iraq and we've made it clear that counterterrorism, particularly the defeat of ISIS, is foremost among those priorities."

Promoted
Listen to the latest songs, only on JioSaavn.com
(Reporting by Steve Holland; Editing by James Dalgleish)
© Thomson Reuters 2017