Where's My Invite?: 2,600 Members Of Public Will Get To Attend Prince Harry And Meghan's Wedding

Don't buy that wedding gift just yet. The guest list will be well vetted. 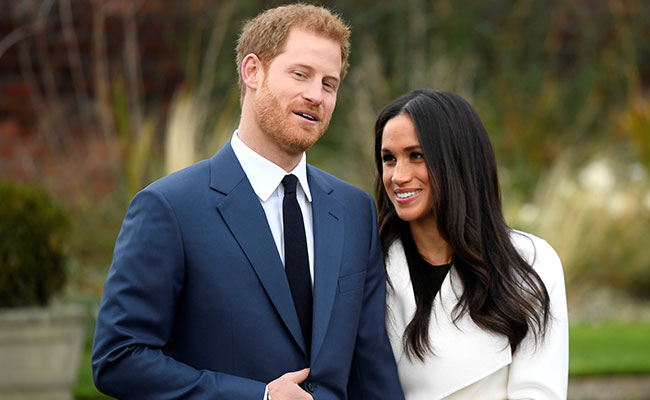 London: Prince Harry and his fiancee, the American actress Megan Markle, announced on Friday that they would invite members of public to their May wedding.

Well, not exactly to the wedding-wedding. But very close. Outside.

Kensington Palace announced that the hoi polloi (vetted, naturally) will be invited inside the walls of Windsor Castle - on the grounds if you will - to get a close-up look at the couple and their celebrity and royal guests as they enter and exit St. George's Chapel, where the nuptial knots will be tied.

These lucky few - well, not exactly few, about 2,640 people - will represent the public at the nuptials.

But these folk will not be your random yobs brought in to gawp. No, no.

They will be selected and special people.

The palace broke it down for you: The largest contingent will be 1,200 members of the public "from every corner of the United Kingdom" nominated by nine regional Lord Lieutenant offices.
So hold off buying your airplane tickets.

"The couple has asked that the people chosen are from a broad range of backgrounds and ages, including young people who have shown strong leadership, and those who have served their communities," a palace spokesman said.

The couple will also invite 530 members of staff from the Royal Household and Crown Estate, and 610 people from "the Windsor Castle community."

"Prince Harry and Ms. Meghan Markle have said they want their wedding day to be shaped so as to allow members of the public to feel part of the celebrations too," a palace spokesman said. "This wedding, like all weddings, will be a moment of fun and joy that will reflect the characters and values of the bride and groom."

Also on the list: 100 pupils from two local schools, The Royal School and St George's School, "both of which have a strong affiliation with the Windsor Castle community," the Telegraph newspaper reports.
So, well-scrubbed kids.

And finally, 200 people from charities supported by Prince Harry and his bride to be, the very popular Markle.

The Telegraph informs us these "are likely to include the stars and staff from the Invictus Games, veterans, mental health charities, HIV awareness campaigns and seriously ill children."

The Invictus Games are a sporting event that sees wounded, injured or sick soldiers compete - similar to the Warrior Games staged in the United States.

The newlyweds are also planning to take a carriage ride through Windsor town center to wave at the people.

It didn't take long for the news of the couple's public invitation to travel.

In minutes "Windsor Castle" was trending on Twitter as users discussed details of the upcoming wedding. Throughout the morning many asked the same question: "How do we get an invite?"

"Our invite must be still en route due to the adverse weather conditions effecting deliveries. I'm sure it will be here today .... or maybe tomorrow," tweeted one.

"HOW DO I GET ON THIS LIST?" an excited royal fan asked.

Others opted to discuss rumors of a possible Spice Girl reunion in time for the wedding and if there would be an invite for President Donald Trump.

So, more to come.

The Washington Post's Jennifer Hassan contributed to this report.


(This story has not been edited by NDTV staff and is auto-generated from a syndicated feed.)
Comments
meghan markle prince harry weddingRoyal WeddingWindsor Castle