Bishop Mariann Edgar Budde, Washington's Episcopal leader, said she learned of the decision by the Trumps and Vice President Mike Pence and his wife to attend services shortly before they began -- and had written her sermon long before. 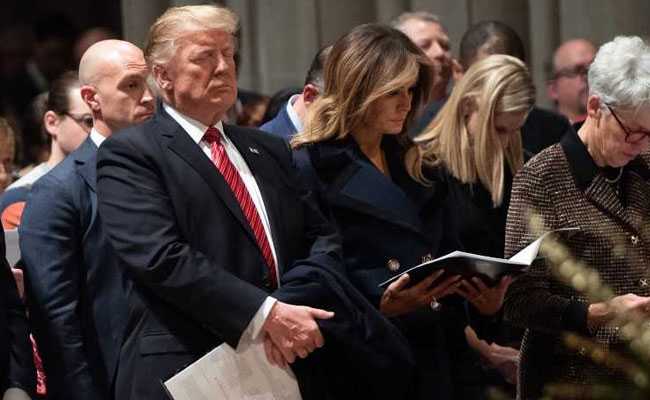 President Donald Trump and first lady Melania Trump attended Christmas Eve services at one of the city's most prominent - and liberal - houses of worship, the Washington National Cathedral, and heard a sermon about the Christmas narrative - in particular the use of power, human cruelty and the struggle of refugees who are turned away at "their greatest hour of need."

Bishop Mariann Edgar Budde, Washington's Episcopal leader, said she learned of the decision by the Trumps and Vice President Mike Pence and his wife to attend services shortly before they began -- and had written her sermon long before. She gave the same sermon to the 6 p.m. Service of Christmas Lessons and Carols, which Mike and Karen Pence attended, and the 10 p.m. Holy Eucharist, which the Trumps attended.

Budde said on Tuesday that she and Cathedral Dean Randy Hollerith greeted Pence and Trump before the services, as is customary.

"President Trump went out of his way to participate," she said. "He sang, prayed, greeted people. As we walked by [in the procession,] he was very present. I think that was lovely to see. In the midst of all we are struggling with right now, policy and practices aside, it's Christmas and the first family is always welcome,

Much of the sermon, "For Love's Sake," sought to explore the enormous human-led efforts to celebrate Christmas are really about. During Christmas, Budde said, people seek to insert themselves into a "wondrous story" - the Christmas narrative. In doing that, she said, they glimpse the presence of God, through extra kindnesses, forgiveness, generosity, grace and peace people extend during Christmastime.

But, she said, the narrative of Jesus' birth isn't about only that.

"You only have to read the first sentence of the story to know that there are deep social implications to it, should we place ourselves in this story. It begins with an emperor who could move people about at will. And so two people forced to obey the emperor's edict set out on a long journey on the last month of the young woman's pregnancy. And they were denied a place of comfort in her greatest hour of need.

And it wouldn't be long before they would be forced to flee again, this time to find refuge from violence in another country. It's right there. It's in the text. It's in the story.

And those who passed it on to us wanted us to know Jesus is no stranger to struggle or sorrow or the whims of human cruelty. They wanted us to know. as they did, both the gift and the responsibility of tending to light shining in darkness. We are the ones, now, to keep the light shining; we are the ones to keep the hope alive. the message of love credible -- and that is no small task.

And some years are easier than others. In the hardest of years it becomes all the more important.

And so I leave you now with the words of Alfred Delp, a Jesuit priest who gave his life in the German resistance of World War II: 'Light your candles quietly, such candles as you possess, wherever you are.' That we do this matters more than we can ever know."

It wasn't clear why the Trumps and Pences veered from their past routines to attend the Cathedral, a dramatic house of worship that often hosts national mourning services such as after the Sept. 11 attacks or when presidents die. A spokesperson for the Cathedral said the two families had only attended worship services twice before at the Cathedral - an inaugural prayer event when they were sworn in and earlier this month at the funeral of George H.W. Bush.

The Trumps are in the nation's capital for the holidays because of the federal government shutdown, scrapping plans to go to Florida. The previous two Christmases they attended to services at the parish where they were married, and where their son was baptized: the Episcopal Church of Bethesda-by-the-Sea in Palm Beach, Fla. They don't regularly attend church but have a few times gone to St. John, the Episcopal church across the square from the White House.

It was not clear if the Pences had planned, before the shutdown, to stay in the District but they did. The last two Christmases they have been in their home state of Indiana.

Melania Trump identifies as Catholic and President Trump has said he is a Presbyterian. The Pences were both raised Catholic but have attended evangelical churches in recent years and identify as evangelical.

Many leaders of the Episcopal Church, a progressive Protestant denomination, have been very critical of White House policies and the Cathedral's stated advocacy goals put it at odds with Trump's public priorities. Its top goals include stopping gun violence, LGBTQ advocacy and racial reconciliation.

Last year, at Bethesda-by-the-Sea in Maryland, the Trumps heard a sermon about the power of words.

"Words matter," the Rev. James Harlan said. "Proverbs 18, for example, says death and life are in the power of the tongue. Words can build up or tear down. Words can speak truth or obfuscate truth. Words convey information, emotion, motivation." Harlan spoke about the healing power of God's words, which, according to biblical teaching, were used to create the universe. And Harlan said, "your words and mine can have as much destructive and divisive potential as creative and healing potential."

On Monday night, Budde preached to the packed, soaring-roofed cathedral about the vision that Christmas - the biblical story and the way it can bring out the good in people - offers.

"I warn you: The gift by design is fleeting. It gives us a moment, not a lifetime of clarity. It gives us a moment, no, not a lifetime of joy. And as any other post-Christmas letdown, we can be disappointed by the fact that that whatever God offers us this Christmas won't last long enough, really, to change much around us...But you see that's not the point. The purpose of God's gift at Christmas, the purpose of Christ coming was never to change the world from the outside, as much as we long for that. Christ comes, friends, to change us, to change us, slowly, imperceptibly. That we might live according to the glimpses of love we've seen in him. And that we might be channels of light.

It's no less real for its fleeting beauty, but it does give us the perfect alibi of deniability if we don't want actually want to live according to the gifts we receive."