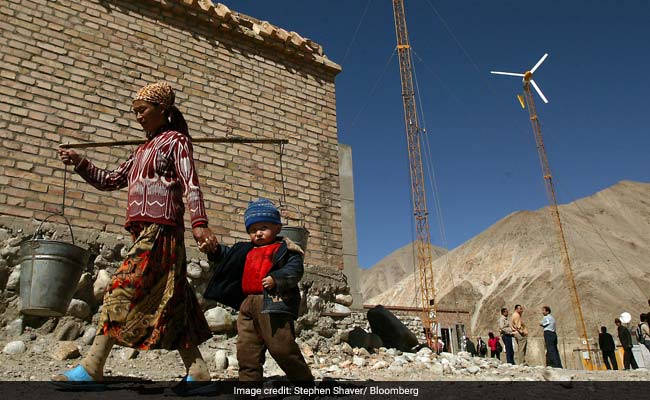 Emerging accounts of the conditions in these camps make for chilling reading.

Beijing: Kayrat Samarkand says his only "crime" was being a Muslim who had visited neighboring Kazakhstan. On that basis alone, he was detained by police, aggressively interrogated for three days, then dispatched in November to a "reeducation camp" in China's western province of Xinjiang for three months.

There, he faced endless brainwashing and humiliation, he said in an interview, was forced to study Communist propaganda for hours every day, and chant slogans giving thanks and wishing long life to President Xi Jinping.

"Those who disobeyed the rules, refused to be on duty, engaged in fights or were late for studies were placed in handcuffs and ankle cuffs for up to 12 hours," he said. Further disobedience would result in waterboarding or long periods strapped in agony in a metal contraption known as a "tiger chair," he said, a punishment he said he suffered.

Between several hundred thousand to just over 1 million Muslims have been detained inside China's mass "reeducation" camps in the restive province of Xinjiang, Adrian Zenz of the European School of Culture and Theology in Korntal, Germany, said in a report released Tuesday. Zenz is a leading authority on the current crackdown in Xinjiang.

In a region of 21 million people, including 11 million Muslims, the number of those he reports to be detained would be a significant proportion of the population, especially of young adult men.

Emerging accounts of the conditions in these camps make for chilling reading.

"China's pacification drive in Xinjiang is, more than likely, the country's most intense campaign of coercive social re-engineering since the end of the Cultural Revolution," Zenz wrote, referring to the chaos unleashed by Mao Zedong in the 1960s.

"The state's proclaimed 'war on terror' in the region is increasingly turning into a war on religion, ethnic languages and other expressions of ethnic identity."

China has blamed violent attacks in Xinjiang in recent years on Islamic extremists bent on waging holy war on the state, with radical ideas said to be coming from abroad over the Internet and from visits to foreign countries by Uighurs, the region's predominant ethnic group.

In response, Beijing has turned the entire region into a 21st-century surveillance state, with ubiquitous checkpoints and widespread use of facial recognition technology, and has even forced Muslims to install spyware on their phones that allows the authorities to monitor their activity online, experts say. Long beards and veils have been banned, and overt expression of religious sentiment is likely to cause immediate suspicion.

In an extension of the already pervasive program of human surveillance, more than 1 million Communist Party cadres have been dispatched to spend days on end staying in the homes of (mostly Muslim) families throughout Xinjiang, according to a report by Human Rights Watch released this week, where they carry out political indoctrination, and report back on anything from the extent of religious beliefs to uncleanliness and alcoholism.

"Muslim families across Xinjiang are now literally eating and sleeping under the watchful eye of the state in their own homes," said Maya Wang, senior China researcher at Human Rights Watch. "The latest drive adds to a whole host of pervasive - and perverse - controls on everyday life in Xinjiang."

But reeducation camps that appear to have opened all across the region have sparked the greatest global concern.

Samarkand said 5,700 people were detained in just one camp in the village of Karamagay, almost all ethnic Kazakhs and Uighurs, and not a single person from China's Han majority ethnic group. About 200 were suspected of being "religious extremists," he said, but others had been abroad for work or university, received phone calls from abroad, or simply been seen worshiping at a mosque.

The 30-year-old stayed in a dormitory with 14 other men. After the room was searched every morning, he said, the day began with two hours of study on subjects ranging from "the spirit of the 19th Party Congress," where Xi expounded his political dogma in a three-hour speech, to China's policies on minorities and religion. Inmates would sing Communist songs, chant "Long live Xi Jinping" and do military-style training in the afternoon, before writing an account of their day, he said.

His account was corroborated by Omir Bekali, an ethnic Kazakh who was working in a tourism company in Urumqi, Xinjiang's capital, until he was arrested by police on a visit to his parents in the village of Shanshan in March 2017. Four days of interrogation, during which he was prevented from sleeping, were followed by seven months in a police cell and 20 days in a reeducation camp in the city of Karamay, he said. He was given no trial, he said, nor granted access to a lawyer.

He described a day that would begin with a flag-raising ceremony at 6:30 a.m. followed by a rendition of one or more "red" songs praising the Communist revolution. After breakfast, inmates would spend 10 minutes thanking the Communist Party and Xi for providing everything for people, from food and drink to their livelihoods.

Inmates had to learn the national anthem and red songs, he said, as well as slogans condemning the "three evil forces" of separatism, extremism and terrorism.

"There were so many things to recite, and if you couldn't recite them, they wouldn't allow you to eat, sleep or sit," he said. "They brainwash you, you must become like a robot. Listen to whatever the party says, listen to the party's words, follow the party."

Some inmates committed suicide, he said.

Both men said the food was poor, with meat rare and food poisoning not uncommon. Inmates were sometimes forced to eat pork, forbidden in Islam, as punishment, while Bekali said those accused of being "religious extremists" were also forced to drink alcohol.

Bekali, 42, had emigrated to Kazakhstan in 2006 and become a Kazakh citizen, and said the Kazakh government eventually won his release. Samarkand said he was allowed to leave for Kazakhstan to join his wife and children after having his house and savings, worth about $190,000, confiscated by the government. He was given 500 yuan, equivalent to $80, by police at the border as he departed.

Both men, interviewed by phone, are now in Kazakhstan.

Although the Chinese government has officially denied the existence of these camps, Zenz gathered evidence of 73 government procurement and construction bids valued at more than $100 million, along with public recruitment notices and other documents, pointing to the establishment of camps across the region.

He dates the onset of widespread detentions to March 2017, and a government campaign of "de-extremification" through education. That followed the appointment of Chen Quanguo as party secretary in Xinjiang in August 2016, and his transfer from Tibet, where he oversaw a similar program of intense social control, surveillance and securitization.

"While there is no published data on reeducation detainee numbers, information from various sources permit us to estimate internment figures at anywhere between several hundred thousand and just over one million," Zenz wrote in a report first published by the Jamestown Foundation.

"The latter figure is based on a leaked document from within the region's public security agencies, and, when extrapolated to all of Xinjiang, could indicate a detention rate of up to 11.5 percent of the region's adult Uighur and Kazakh population."

Bekali said he met doctors, lawyers and teachers in the camps, while Radio Free Asia (RFA) has reported that wealthy businessmen, 80-year-olds and even breast-feeding mothers have been among the detainees.

One of the most well-known detainees is a Uighur soccer player, Erfan Hezim, 19, a former member of China's youth soccer team and now a forward for Chinese Super League team Jiangsu Suning. Hezim, also known by his Chinese name Ye Erfan, was detained in February while visiting his parents in Xinjiang, according to RFA, on the pretext that he had visited foreign countries, although he had reportedly traveled abroad only to train and take part in soccer matches.

Also detained have been dozens of family members of journalists from the Washington-based RFA, who have been at the forefront of reporting on the deepening crackdown in Xinjiang and the reeducation camps. At least two of the affected reporters, both naturalized U.S. citizens, have reason to believe their family members were detained directly because of their reporting, RFA said.

In one report, RFA quoted a Chinese official as justifying the widespread detentions in blunt terms.

Promoted
Listen to the latest songs, only on JioSaavn.com
"You can't uproot all the weeds hidden among the crops in the field one by one - you need to spray chemicals to kill them all," the official was quoted as saying. "Reeducating these people is like spraying chemicals on the crops. That is why it is a general reeducation, not limited to a few people."