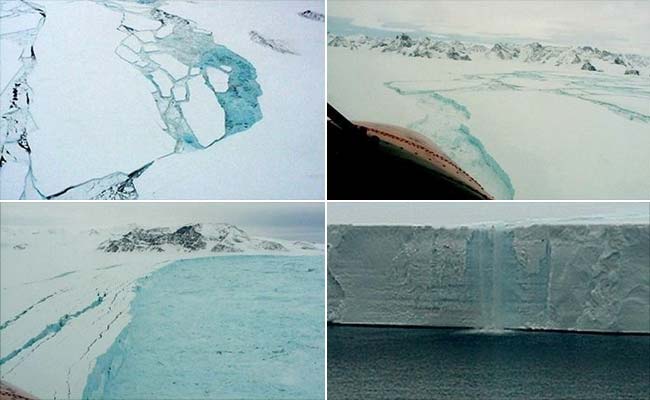 Aerial photographs taken in February and March 2002 of parts of the Larsen B shelf in the Antarctic. (Reuters)

Los Angeles: The last intact section of one of Antarctica's mammoth ice shelves is weakening fast and will likely disintegrate completely in the next few years, contributing further to rising sea levels, according to a NASA study released on Thursday.

The research focused on a remnant of the so-called Larsen B Ice Shelf, which has existed for at least 10,000 years but partially collapsed in 2002. What is left covers about 625 square miles (1,600 square km), about half the size of Rhode Island.

Antarctica has dozens of ice shelves - massive, glacier-fed floating platforms of ice that hang over the sea at the edge of the continent's coast line. The largest is roughly the size of France.

Larsen B is located in the Antarctic Peninsula, which extends toward the southern tip of South America and is one of two principal areas of the continent where scientists have documented the thinning of such ice formations.

"This study of the Antarctic Peninsula glaciers provides insights about how ice shelves farther south, which hold much more land ice, will react to a warming climate," said Eric Rignot, co-author of the study and a glaciologist at NASA's Jet Propulsion Laboratory in Pasadena, California.

Almost 200 countries have agreed to negotiate a United Nations pact by the end of 2015 to combat global climate change, which most scientists expect will bring about more flooding, droughts, heat waves and higher seas.

The UN Intergovernmental Panel on Climate Change has cited a probability of at least 95 percent that accelerated warming of the planet has been triggered by human activities, led by atmospheric emissions of greenhouse gases from the burning of fossil fuels.

The study, published online in the journal Earth and Planetary Science Letters, was based on airborne surveys and radar data.

The study's lead scientist, Ala Khazendar, said analysis of the data reveals that a widening rift in Larsen B will eventually break it apart completely, probably around the year 2020.

Promoted
Listen to the latest songs, only on JioSaavn.com
Once that happens, glaciers held in place by the ice shelf will slip into the ocean at a faster rate and contribute to rising sea levels, scientists say.

The study also found Leppard and Flask, two main tributary glaciers of the ice shelf, have thinned by between 65 and 72 feet (20 to 22 meters) in recent years, and the pace of their shrinking has accelerated since the immediate aftermath of the 2002 partial collapse of the ice shelf.
© Thomson Reuters 2015