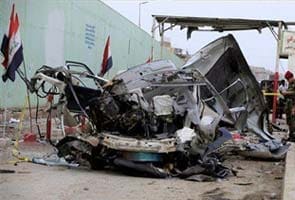 Baghdad: A wave of attacks killed at least 86 people in Shiite and Sunni areas of Iraq on Monday, officials said, pushing the death toll over the past week to more than 230 and extending one of the most sustained bouts of sectarian violence the country has seen in years.

The bloodshed is still far shy of the pace, scale and brutality of the dark days of 2006-2007, when Sunni and Shiite militias carried out retaliatory attacks against each other in a cycle of violence that left the country awash in blood. Still, Monday's attacks, some of which hit markets and crowded bus stops during the morning rush hour, have heightened fears that the country could be turning back down the path toward civil war.

Sectarian tensions have been worsening since Iraq's minority Sunnis began protesting what they say is mistreatment at the hands of the Shiite-led government. The mass demonstrations, which began in December, have largely been peaceful, but the number of attacks rose sharply after a deadly security crackdown on a Sunni protest camp in northern Iraq on April 23.

Iraq's Shiite majority, which was oppressed under the late dictator Saddam Hussein, now holds the levers of power in the country. Wishing to rebuild the nation rather than revert to open warfare, they have largely restrained their militias over the past five years or so as Sunni extremist groups such as al-Qaida have targeted them with occasional large-scale attacks.

But the renewed violence in both Shiite and Sunni areas since late last month has fueled concerns of a return to sectarian warfare. Monday marked the deadliest day in Iraq in more than eight months, and raised the nationwide death toll since last Wednesday alone to more than 230 people, according to an AP count.

Prime Minister Nouri al-Maliki accused militant groups of trying to exploit Iraq's political instability to exacerbate sectarian tensions at home, and also blamed the recent spike in violence on the wider unrest in the region, particularly in neighboring Syria. At the same time, he pledged Monday that insurgents "will not be able to bring back the atmosphere of the sectarian war."

Many Sunnis here contend that much of the country's current turmoil is rooted in decisions made by al-Maliki's government, saying his administration planted the seeds for more sectarian tension by becoming more aggressive toward Sunnis after the U.S. military withdrawal in December 2011.

The worst of Monday's violence took place in Baghdad, where ten car bombs ripped through open-air markets and other areas of Shiite neighborhoods, killing at least 48 people and wounding more than 150, police officials said. In the bloodiest attack, a parked car bomb blew up in a busy market in the northern Shiite neighborhood of Shaab, killing 14 and wounding 24, police and health officials said.

The surge in bloodshed has exasperated Iraqis, who have lived for years with the fear and uncertainty bred of random violence.

"How long do we have to continue living like this, with all the lies from the government?" asked 23-year-old Baghdad resident Malik Ibrahim. "Whenever they say they have reached a solution, the bombings come back stronger than before."

"We're fed up with them and we can't tolerate this anymore," he added.

The predominantly Shiite city of Basra in southern Iraq was also hit Monday, with two car bombs there - one outside a restaurant and another at the city's main bus station - killing at least 13 and wounded 40, according to provincial police spokesman Col. Abdul-Karim al-Zaidi and the head of city's health directorate, Riadh Abdul-Amir.

In the town of Balad, about 80 kilometers (50 miles) north of Baghdad, a car bomb exploded next to a bus carrying Iranian pilgrims, killing 13 Iranians and one Iraqi, a police officer said on condition of anonymity because he was not authorized to brief the media.

There was no immediate claim of responsibility for the attacks, but the fact that they all occurred in Shiite areas raised the suspicion that Sunni militants were involved. Also, Sunni insurgents, particularly al-Qaida in Iraq, are known to employ such large-scale bombings bear.

Monday's violence also struck Sunni areas, hitting the city of Samarra north of Baghdad and the western province of Anbar, a Sunni stronghold and the birthplace of the protest movement.

A parked car bomb in Samarra went off near a gathering of pro-government Sunni militia who were waiting outside a military base to receive salaries, killing three and wounding 13, while in Anbar gunmen ambushed two police patrols near the town of Haditha, killing eight policemen, police and army officials said.

Promoted
Listen to the latest songs, only on JioSaavn.com
Also in Anbar, authorities found 13 bodies dumped in a remote desert area, officials said. The bodies, which included eight policemen who were kidnapped by gunmen on Friday, had been killed with a gunshot to the head.

The officials spoke on condition of anonymity because they were not authorized to talk to the media.