The graphic statements from Wesley Mathews were revealed in an arrest warrant released by Richardson. 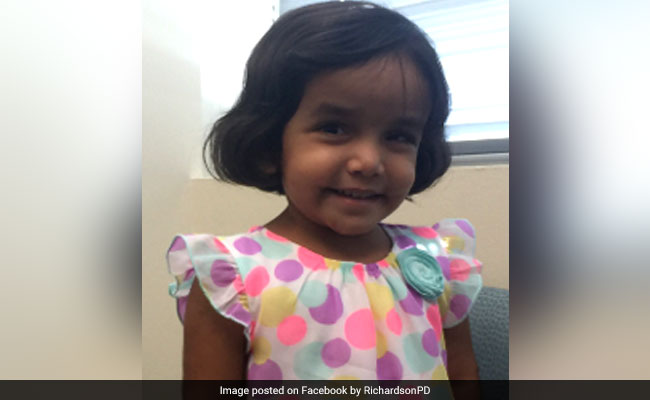 3-year-old Texas girl Sherin Mathews has been missing since October 7.

Texas: The father of a 3-year-old Texas girl missing since Oct. 7 told police that he watched his daughter choke on milk and die, then removed her body from the home, according to an arrest affidavit.

The graphic statements from Wesley Mathews were revealed in an arrest warrant released by Richardson, Texas, police on Tuesday morning.

Mathews "had been trying to get the 3 year old girl to drink her milk in the garage" early on Oct. 7, the affidavit said. "Wesley Mathews said she wouldn't listen to him."

At that point, Mathews said he "physically assisted" Sherin in drinking her milk and the girl choked on the drink.

"She was coughing and her breathing slowed. Eventually, Wesley Mathews no longer felt a pulse on the child and believed she had died."

Then, he told police, he removed her body from the home.

Mathews provided the "alternate statement of events" to detectives the day after the body of a small child was found outside Dallas, Richardson police said. He has been charged with injury to a child, a first-degree felony punishable by up to life in prison, and is being held on a $1 million bond, police said.

Mathews had previously claimed that his adopted daughter, Sherin, went missing Oct. 7 after he sent her alone into an alley as punishment for refusing to drink her milk.

But Monday night - not long after authorities said they had "most likely" found the girl's body - police said Mathews "voluntarily arrived at the Richardson Police Station with his attorney and asked to speak with detectives."

He revealed the new details and was arrested.

Police have still not confirmed that the child's body found Sunday was Sherin's, and they are awaiting the results of an autopsy to determine how the child died.

The body was discovered by officers and search dogs examining a culvert near Spring Valley and Bowser roads, less than a mile from the family's home in the suburb of 100,000 about 15 miles north of Dallas. A police spokesman told reporters that investigators have no reason to believe that the body belongs to another missing child.

"Worst news finding child's body," Richardson Police Chief Jimmy Spivey tweeted Sunday. But if the body is Sherin's, the chief said he's "happy [it has been] recovered so properly laid to rest."

He also vowed to bring those responsible "to justice."

It was Mathews's second arrest in the case. He was arrested on child abandonment and endangerment charges the day Sherin went missing but had been released on bail.

As part of his bail condition, he was required to surrender his passport and wear an electronic monitoring bracelet so authorities could track him at all times, according to the Dallas Morning News.

Earlier Monday, Mathews and his wife, Sini, attended a court hearing to determine whether they could regain custody of their biological daughter.

The 4-year-old had been taken into custody by Child Protective Services and placed in foster care after Sherin was reported missing. The judge postponed the hearing until Nov. 13 to give Mathews time to hire a civil attorney, a spokeswoman for CPS told The Associated Press.

"We do have the names of some relatives who have expressed interest in taking care of her," said the spokeswoman, Marissa Gonzales. "We can begin looking into those relatives, but it is entirely up to the judge where she is placed."

After the hearing, the father's attorney, Rafael De La Garza, told the Dallas Morning News that his client was "mourning the death of his child." De La Garza did not immediately respond to requests for comment on Tuesday.

The murky details of Sherin's disappearance have transfixed the Dallas area for most of this month.

Her father previously told investigators that he looked outside 15 minutes after he sent Sherin into the alley but she was gone, according to police affidavits.

Not yet too worried, the father said, he then did a load of laundry, according to the affidavit. He waited until after sunrise before he reported the disappearance to police. They began searching for the 22-pound girl last seen wearing a pink top, black pajama bottoms and pink flip-flops.

Detectives and FBI agents searched the Mathews house midweek and subsequently announced that someone left in the family's SUV around 4 a.m. on the day she disappeared. That person returned home within the hour, they said.

Police said Sherin's mother was asleep during the incident and has not been charged. Her attorney said she has cooperated with authorities in trying to help identify Sherin's body.

Promoted
Listen to the latest songs, only on JioSaavn.com
Mathews and his wife adopted Sherin about two years ago from an orphanage in India, said Sgt. Kevin Perlich, a spokesman for the Richardson Police Department. Mathews told police that Sherin was malnourished and had to be on a special diet to gain weight. She had to be fed whenever she was awake, Perlich said.