A YouTuber is gaining traction on social media for inventing robotic legs for a snake to assist it in walking. 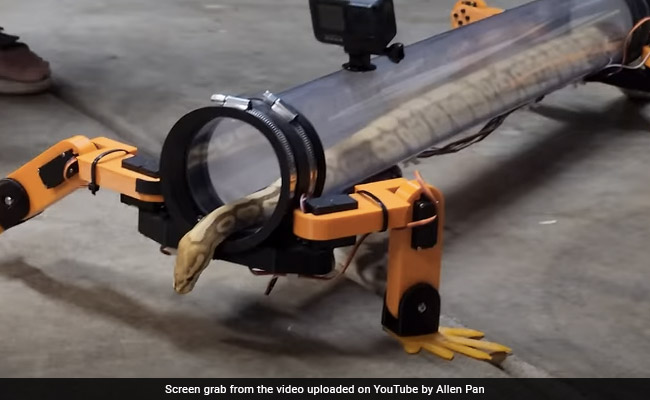 A YouTuber is gaining traction on social media for inventing robotic legs for a snake to assist it in walking. Allen Pan released a video on his YouTube channel on Saturday in which he explains his engineering techniques. Mr Pan is a content producer who employs technical know-how to make homemade exoskeletons, battlebots, and other innovations that regularly receive millions of views online.

"Giving snakes their legs back," he wrote while sharing the post.

The YouTuber stated that the effort was created to demonstrate that he is a "snake lover." Mr Pan's radical new invention - a set of robot legs that equip snakes with the limbs that biology has unjustly denied them - is winning hearts online.

Mr Pan, who we previously wrote about when he transformed himself into an exoskeleton-wearing swordfighter, argues that he has to surpass nature's constraints once more by giving snakes new limbs to compensate for their vestigial legs being lost before birth, according to Yahoo News.

The video has received more than 2 million views and more than 1.1 lakh likes so far. Numerous users have given surprising remarks on the video in the comment section of the post while few others wrote about the fact about snakes not having legs.

"Finally, someone cares enough to give the snakes their legs back," wrote a user.

Another said, "The snake's initial reluctance to metamorphosize is only logical. There is always a moment of uncertainty before becoming the most powerful version of oneself."