A surprising video of a musician from Ukraine playing violin on the frontline is now doing the rounds on the internet. 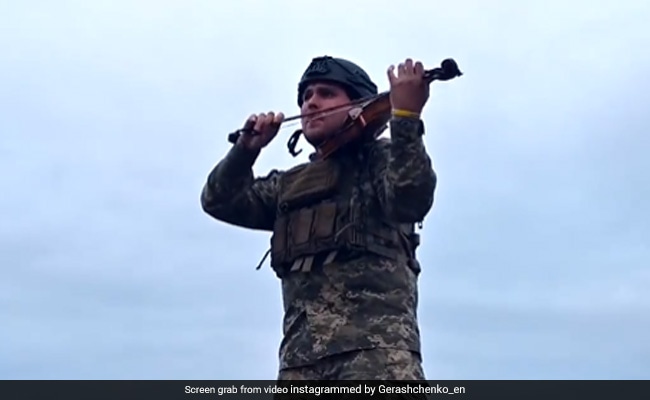 Image shows the Ukrainian Musician playing violin on the frontline.

More than seven months have passed since Russia invaded Ukraine. Every single Ukrainian, from military to civilian, is doing their duty selflessly for their nation. Several videos and pictures that spread hope among the nation's citizens have appeared online during the conflict. A surprising video of a musician from Ukraine playing violin on the frontline is now doing the rounds on the internet.

Street musician Moisey Bondarenko who now serves in the Army, plays his violin right on the frontlines.

The video was posted by the Advisor to the Minister of Internal Affairs of Ukraine, Anton Gerashchenko, on Twitter on Saturday. While sharing the post, he wrote, "Street musician Moisey Bondarenko, who now serves in the Army, plays his violin right on the frontlines. Just listen to how incredible it sounds! "

The video opens with a man wearing a Ukrainian soldier's uniform having a violin in his hands, playing amazing music. According to the post, Mr Bondarenko has recently enlisted in the army. In the video, he can be seen playing in an open field. His music has an incredible sound that is enough to make anyone's day.

Since being shared, the video has brought an internet storm. It has amassed over 4.3 lakh views and more than 24,000 likes in just one day. More than 5,000 users have retweeted the post, and numerous have swamped the comment section of the post with heartfelt remarks praising the musician, who has now become a soldier too.

One user wrote, "May he live to continue playing wonderful music!"

Another said, "Absolutely beautiful. Absolutely haunting. Absolutely sad. That someone with this amazing talent is standing in his defender's uniform playing his music instead of being in an orchestra somewhere in Ukraine. What a talent. Please survive and play again when Ukraine is free."

"And this... (I will stop here but this is why investment in humanities and creative arts is important-we see the world through other eyes)," wrote a third user while sharing the post.