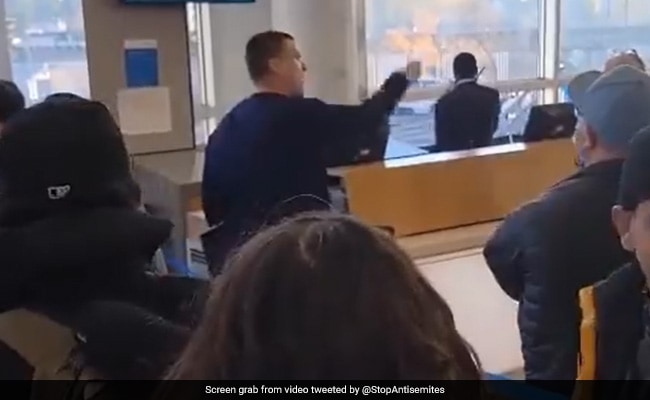 The person was later arrested by the police. (File)

A video, which has been widely shared on the internet, shows a man hurling anti-semitic slurs at passengers and acting aggressively at a busy airport in Seattle in the US. The person was later arrested by the police.

In one video shared on Twitter, the man can be seen raising his arm to give the Nazi salute and shouting “Heil Hitler” while being surrounded by passengers. The man continues making anti-Jewish remarks as shocked onlookers watch on. He can be heard yelling “You go to the gas chamber!” and that the “Jews got what they deserved”.

Seattle, WA airport earlier today - a man was arrested after throwing up Heil Hitler salutes and screaming of a race war in the busy airport, gate D10. pic.twitter.com/SZx6oEARv6

The person, identified as Nicholas Edward Letney, was later arrested at the airport. In another video, police officers are seen subduing Letney by holding his hands back while he is lying on the ground. The clip shows Letney talking incessantly and making objectionable remarks even when being arrested.

Correction - this incident occurred on November 20; footage of the arrest ???????? pic.twitter.com/5BSW7HpnIq

The videos amassed more than a million views on Twitter and saw numerous reactions.

Many were left appalled by the offensive statements of the man.

“And no one throat-punched him,” a user asked.

And no one throat-punched him?

Another said, “Someone should've taken him down. It would be a positive on your resume, even if you got arrested.”

Someone should've taken him down. It would be a positive on your résumé, even if you got arrested.

“Guarantee he is now on the Do Not Fly status,” a comment read.

Guarantee he is now on the Do Not Fly status.

A person wrote, “The fact that no one put him to sleep is very disappointing.”

The fact that no one put him to sleep is very disaapointing.

Another said, “People standing around letting him berate her pisses me off, to be honest.”

People standing around letting him berate her pissses me off, to be honest.

“As a former gate lead, he would not be getting on my aircraft or near my gate,” a user wrote.

As a former gate lead, he would not be getting on my aircraft or near my gate.

Some rejoiced that the person was arrested for his act.

I hope everyone clapped as he was arrested.

Letney was also arrested in 2016 on suspicion of indecent assault. However, his case was closed by reason of incompetency. Police report said that Letney was making statements about the Cold War at the time of his arrest, according to Paddle Your Own Kanoo.