Chris Martin surprised the locals after attending the Glastonbury festival with his partner Dakota Johnson. 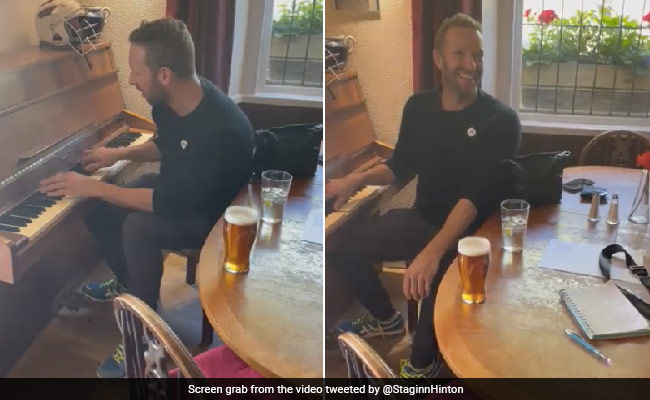 The video has garnered more than one million views and over 43,000 likes.

Pub-goers in Bath, UK, were given a surprise performance by Chris Martin on Sunday, June 26.

A family pub in the small village of Hinton Charterhouse in England shared the video on Twitter of the Coldplay frontman playing a rendition of A Sky Full Of Stars on the piano. In the clip, Mr Martin is seen at the Stag Inn enjoying a pint of beer - before taking the request to play a song.

“You never know who might pop in for a pint! @coldplay what a lovely man he is,” the caption of the post read.

You never know who might pop in for a pint! @coldplay what a lovely man he is. pic.twitter.com/V3INYbD0rB

Since being shared, the video has taken the internet by storm. It has garnered more than one million views and over 43,000 likes.

According to the Independent, Chris Martin surprised the locals after attending the Glastonbury festival with his partner Dakota Johnson. The pub's landlord Chris Parkin had been sitting at the bar with a local farmer when the musician walked in.

Speaking to Somerset Live, Mr Parkin said, “We had just finished lunch service and I was at the bar when this man walked in and I said to the lad sat next to me, ‘Crikey that fella looks like Chris Martin'.”

“The lady, who was his PA (personal assistant) who was with him, turned and said, ‘It is,'” he added.

The pub owner went on to say that he poured the group some pints of Guinness before they went and sat outside. Mr Martin's impromptu performance came about when a bride and groom told him that they intended to play Coldplay's 2015 hit Sky Full Of Stars at their forthcoming wedding.

“To our surprise, [Martin] turned around and asked us if we wanted him to play it on the pub's piano, to which we said yes,” Mr Parkin said.

Then, Chris Martin played the track. However, he stopped before reaching the high notes, apparently telling the crowd that his voice was a “little hoarse” due to “partying all weekend” at Glastonbury. Mr Parkin revealed that the musician gave the engaged couple some advice ahead of their ceremony, telling the groom to “listen to everything” that the bride says.