Thousands of opposition supporters gathered in the city on Tuesday as Albania hosts its first EU-Balkans summit. 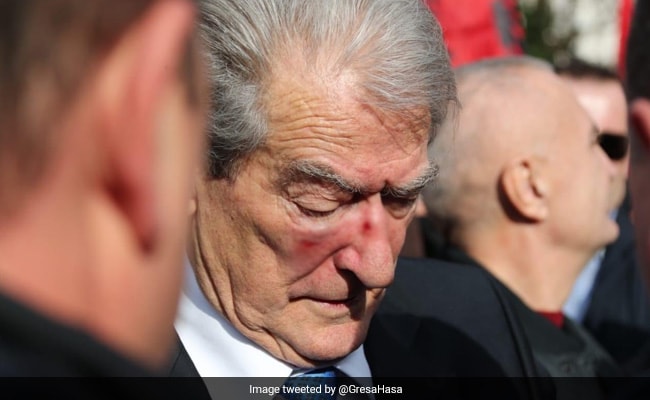 Sali Berisha had blood on his face but was later due to speak at the rally.

Albanian opposition leader Sali Berisha was punched in the face by a male bystander as he led a crowd of his party's supporters to central Tirana for anti-government protests taking place meters away from the venue of an EU summit.

Thousands of opposition supporters gathered in the city on Tuesday as Albania hosts its first EU-Balkans summit, attended by leaders of European Union member states, to protest against the government of Prime Minister Edi Rama and demand early elections.

As Berisha, who leads the centre-right Democratic Party, walked in front of his supporters waving Albanian and EU flags, a man approached him and punched him in the face.

Former Prime Minister and Leader of the Opposition #SaliBerisha was physically assaulted in the #Protest that the Opposition is organizing today in #Tirana. A few meters away, the #EUWB#Summit is being held#Albaniapic.twitter.com/MPpErZAASb

Berisha had blood on his face but was later due to speak at the rally.

The attacker was beaten by Berisha supporters and arrested by the police.

Berisha, a former president and prime minister, is banned from entering the United States over alleged corruption. He denies the charges.