Was told not to choose Indian name while in hiding: Rushdie 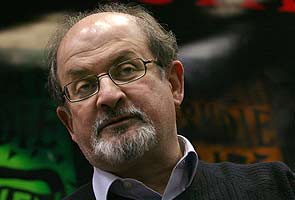 New York: India-born author Salman Rushdie has said that he chose the alias 'Joseph Anton' during his years in hiding in the wake of an Iranian 'fatwa' as he was advised against using an Indian name, recalling that it felt "worse" to not just lose his name but also ethnicity.

"They told me not to choose an Indian name, to make it even worse you give up not only your name but the ethnicity of your name," 65-year-old Rushdie said during an appearance on Thursday at the New York Public Library, where he spoke about his memoir 'Joseph Anton'.

He said since he could not have his country of origin in his name, he turned to his own country of literature.

"I thought if I cannot have that country, I will have my own county, which was literature," Rushdie said explaining why he chose the alias 'Joseph Anton', which is a combination of writers Joseph Conrad and Anton Chekhov, both of whom he admired.

He added in a lighter vein that he had always wanted to write a book which had a person's name as the title.

Rushdie said once the fatwa was issued against him by Iran's Supreme Leader late Ayatollah Khomeini, the subject of discussion stopped being the text of his book 'The Satanic Verses' but "the subject became murder and terrorism".

He said people did not read the book but formed their opinion based on "falsification, gossip and hearsay".

"I felt that the book that was being discussed didn't exist," he said to a packed hall.

Rushdie claimed that the attacks against his book were "organised and manufactured."

Promoted
Listen to the latest songs, only on JioSaavn.com
Recalling his years in hiding, Rushdie said during times that he grew frustrated, he thought about the history of literary persecution and drew strength from the courage shown by other writers who did not "crumble" and stood up against tyranny.