The 200-plus young women make up a large part of the huge North Korean delegation at the Pyeongchang Winter Olympics, the result of a rare inter-Korean agreement last month. 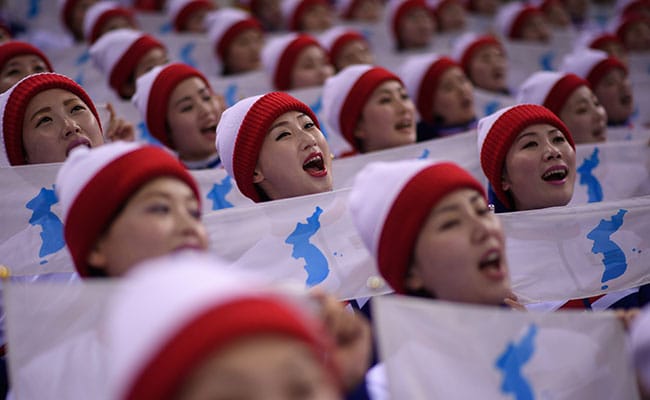 200-plus young women from North Korea were called in Pyeongchang Winter Olympics to support the nation.

Gangneung, South Korea: Roaming the Olympic venues in their red winter suits and white woolly hats, North Korea's cheerleaders have been on a mission to show the human side of the nuclear-armed state, but observers say they have seen little success.

The 200-plus young women make up a large part of the huge North Korean delegation at the Pyeongchang Winter Olympics, the result of a rare inter-Korean agreement last month.

All in their late teens or early 20s and said to be handpicked from elite universities after strict background checks, the cheerleaders passionately chant at events, clap and wave in unison, and sing traditional songs.

At other times, they have taken a beach stroll, enjoyed an exhibition, visited a local tourist site and put on a handful of street concerts.

"Their real mission was to be charming," said Andrei Lankov, a professor at Seoul-based Kookmin University.

"This is exactly the message that they are supposed to deliver -- that we North Koreans ... are not battle robots whose only pastime is memorising speeches of the Dear Leader."

But while the cheerleaders were a "massive sensation" when they came 15 years ago, he said, "Now the South Korean public doesn't care that much."

And for some, their robotic presence in the stands was daunting.

"To be honest, sometimes I felt like maybe they weren't here for us," said Randi Griffin, an American skater on the unified Korean women's hockey team the first formed by North and South in 27 years.

Nice To Meet You

Several public appearances later, little is known about the cheerleaders.

They are subject to tight control and surveillance, and spend their free time quarantined in the Inje Speedium hotel about 120 kilometres (75 miles) away from the Games venues.

"We have no interaction with the guests," said hotel spokesman Kim Tae-eun.

The cheerleaders stay in their rooms, he added, and a dozen South Korean police guard the hotel entrances.

Pyongyang wants to minimise the cheerleaders' exposure to the South, Lankov said.

Coming from elite families, they were "relatively well aware about South Korean economic prosperity" he said, but added: "There is a big difference between being told about something and seeing something with your own eyes."

Wherever they go, the 200-plus cheerleaders always move in a single large group -- even all going to the toilet together.

They are surrounded by North Korean security agents, who sternly break off any attempts at engagement by the media or the public, and they rarely respond to questions from curious South Koreans.

When they do, they usually offer a uniform response of "Nice to meet you".

And when the day's official schedule is finished, they are quickly ushered onto their buses and taken back to their hotel.

"North Korea worries about its people engaging with the South and vice versa," said Lee Woo-young, a professor at the University of North Korean Studies in Seoul.

Seoul has dozens of its own officials monitoring the Northerners, and authorities on both sides worry about potential defections and the impact they could have on their Olympics-driven rapprochement.

More than 30,000 North Koreans have fled repression and poverty in their homeland to reach the South over the decades since the end of the 1950-53 Korean War.

The vast majority leave through the northern border with China, before travelling on to another country, but there have been high-profile cases elsewhere in recent years, including a London-based diplomat and a spectacular defection at the Demilitarized Zone by a solder who ran through a hail of bullets.

Promoted
Listen to the latest songs, only on JioSaavn.com
"Any defection on the Games will become massive political disaster for both North and South Korea," said Lankov.

(Except for the headline, this story has not been edited by NDTV staff and is published from a syndicated feed.)
Comments
Army Of BeautiesPyeongchang 2018 Winter GamesPyeongchang Olympic Games