A video is going viral on social media that shows a tiger taking a stroll on the streets in a town in Mexico's Nayarit state, on Tuesday. 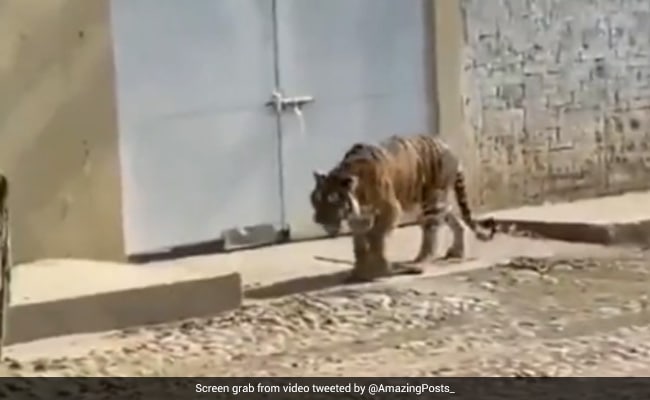 The environment protection department confirmed the animal was being kept illegally.

A video is going viral on social media that shows a tiger taking a stroll on the streets in a town in Mexico. The video identifies the animal as Bengal tiger and the video was captured in Tecuala, in Mexico's Nayarit state, on Tuesday.

A Bengal Tiger roaming around town and then gets taken home without any resistance. This happened in Tecuala, Mexico. pic.twitter.com/TtDwbHAjRT

The Attorney General for Environmental Protection (PROFEPA) said on Wednesday that it captured the tiger on the border with Sinaloa, which is home to the same-named cartel, according to Sydney Morning Herald.

The action was taken by the department "after receiving reports about a Bengal tiger wandering the streets of Tecuala", and they confirmed the animal was being kept illegally, the outlet added.

The video also shows a young woman shouting after coming face-to-face with the tiger.

Later in the footage, the tiger is seen waiting for someone and a man can be seen tying a rope around its neck and taking the animal away. According to local media, the tiger's claws had been removed.

The internet went crazy over a video of a Royal Bengal Tiger that jumped from a boat while being carried to the Sundarbans in Assam, India for release into the wild in April this year. The video shows the rescued tiger jumping into the water, and without even looking back, swims its way into the natural habitat.

The video was shared by Indian Forest Officer (IFS) Parween Kalwan on Twitter with the caption: "The Tiger sized jump though. Old video of rescue and release of tiger from Sundarbans."